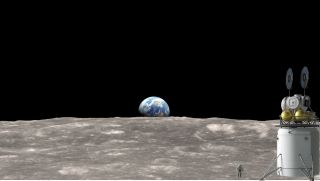 NASA is searching for partners to build technology that would help astronauts land on the moon from a future orbiting Gateway station. This artist's concept shows the Human Landing System and an astronaut.
(Image: © NASA)

NASA has serious plans to send astronauts back to the moon by 2028, and the agency is looking for help from U.S. companies to develop technology to accomplish this feat.

On Dec. 13, NASA announced plans under Space Policy Directive-1 to partner with U.S. companies to design and develop new reusable systems for astronauts to land on the lunar surface, according to a statement from the space agency.

NASA will test new human-class landers on the moon in 2024 and expects to send a crewed mission to the lunar surface as early as 2028, according to the statement. [21 Most Marvelous Moon Missions of All Time]

Current plans for sending humans to the moon involve a multisystem approach that relies on three separate elements to provide transfer, landing, and safe return to and from the surface of the moon. Part of this plan includes using NASA's planned Lunar Orbital Platform-Gateway outpost. The space agency plans to start building this moon-orbiting space station in the next half-decade, NASA officials have said.

"Building on our model in low-Earth orbit, we'll expand our partnerships with industry and other nations to explore the moon and advance our missions to farther destinations such as Mars, with America leading the way," Jim Bridenstine, NASA's administrator, said in the statement. "When we send astronauts to the surface of the mMoon in the next decade, it will be in a sustainable fashion."

NASA will issue an appendix to its Next Space Technologies for Exploration Partnerships 2 (NextSTEP-2) program early next year, calling for proposals from U.S. partners to develop lunar landers designed for astronauts. Under this initiative, NASA will fund the development and flight demonstrations of the landers, according to the statement.

As part of the partnership, NASA will ask U.S. companies to study the best approach for landing astronauts on the moon and then start developing the technology as quickly as possible, according to the statement.

"When NASA again sends humans to the moon, the surface will be buzzing with new research and robotic activity, and there will be more opportunities for discovery than ever before," NASA officials said in the statement. "Private sector innovation is key to these NASA missions, and the NextSTEP public-private partnership model is advancing capabilities for human spaceflight while stimulating commercial activities in space."

The LOP-G outpost is a key part of building reusable lunar landers for round-trip journeys to and from the surface of the moon. Two of the lander elements are expected to be reusable and refueled by cargo ships carrying fuel from Earth to the Gateway, NASA officials have said.

Additionally, astronomers recently announced the discovery of water ice on the lunar surface. Mining this natural resource and the lunar-surface material called regolith could produce the materials needed to create hydrogen-oxygen rocket propellant, which could fuel the lander.

"Once the ability to harness resources from the moon for propellant becomes viable, NASA plans to refuel these elements with the moon's own resources," NASA officials said in the statement. "This process, known as in-situ resource utilization or ISRU, will make the third [lander] element also re-fuelable and reusable."