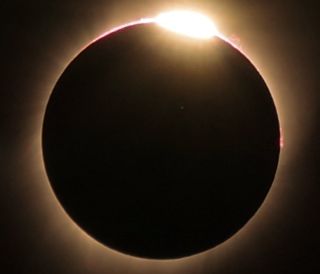 As the moon covers all but the slightest sliver of the sun from a vantage point in Wyoming on Aug. 21, 2017, a solar flare is visible on the upper right quadrant of the sun's surface.
(Image: © John Mitchell)

At first glance, it doesn't seem like anything particularly special: For the next total eclipse of the sun, set for July of next year, an aircraft will fly into the shadow of the moon. This has been done before on many other occasions, with the primary purpose usually to fly above any potential cloud cover that might otherwise obscure a view of the eclipse.

In fact, the first attempt to see a solar eclipse from an airplane took place just over a century ago, on June 8, 1918. Scientific American later noted that while the flight was "not undertaken with any serious scientific objective in view, it was at least demonstrated that we may eventually look to the aviator for work of value in connection with eclipses."

Sometimes, an aircraft has traveled along the path of the shadow in order to try to extend the length of totality by perhaps a minute or two. [In 1925, Observers Lined Manhattan to Measure a Total Solar Eclipse]

But this particular eclipse flight is going to attempt to do much better than that.

At the total solar eclipse on July 2, 2019, a jet aircraft will race along the path of totality and in doing so, will dramatically slow the moon's movement across the sun, potentially doubling the duration of total eclipse that would otherwise be visible for a stationary observer on the ground.

The flight plan has been worked out by Glenn Schneider, an astronomer at the University of Arizona's Steward Observatory who describes himself as an "umbraphile": addicted to the glory and majesty of total solar eclipses. Indeed, since experiencing his first totality as a teenager in 1970,. Schneider has traveled to a total of 34 total eclipses to date, spending 102 minutes and 23.2 seconds "basking" in the shadow of the moon.

Since 1986, he has planned or executed 13 flights for airborne eclipse expeditions. Space.com readers may recallan adventure orchestrated by Schneider where a solar eclipse was encountered during an overflight of the North Pole; a flight where I was a participant.

In the middle of nowhere

July 2's totality path is chiefly over the open waters of the South Pacific. The maximum duration of totality is a healthy 4 minutes and 32 seconds; almost two minutes longer than the "Great American Total Eclipse" of 2017.

But that point of maximum eclipse in July is out in the middle of nowhere. The only land that the moon's shadow touches is tiny Oeno Island in the Pitcairn group and then at the very end of the path over Chile and Argentina, where viewing sites may well be thwarted by cloudy or foggy winter days and precipitation.

But Schneider will have at his disposal a chartered LATAM Boeing 787-9 Dreamliner aircraft, which virtually eliminates all weather risk factors. Based on his computations, described online here, the aircraft will keep pace with the rapidly moving lunar umbral shadow long enough to give rise to a totality time possibly exceeding 9 minutes (depending on winds aloft) from nearly 8 miles above the South Pacific.

In contrast, the absolute maximum duration of a total solar eclipse as seen from the ground is 7.5 minutes, not to be attained until the year 2186.

Only three other eclipse flights have ever been able to keep up with the lunar shadow beyond the maximum duration: in 1955 on a USAF T-33, in 1973 on a Concorde supersonic aircraft and in 2010 on an Airbus A319. With the singular exception of the 2010 flight, this will be only the second extreme-duration totality flight ever undertaken by a non-military or non-experimental aircraft.

The opportunities for studying the sun's coronal and chromospheric features during such a flight — its outer atmosphere and visible "surface" — are unique. For past eclipse flights, Schneider has had his camera equipment set up on a platform stabilized by two gyroscopes. His experiments have dealt in part with the density of plasma in the solar corona and the question of how it is heated to millions of degrees Fahrenheit. "From a dark and cloudless sky at 41,000 feet," he notes, "the high-contrast view of the totally eclipsed Sun against the umbra-darkened background sky above 80 percent of the atmosphere, is unparalleled, spectacular and breathtakingly glorious."

Although balloons, rockets and satellites reach even greater heights, there is no way to control their movements in relation to the sun and moon to achieve such an unusual lengthening of a total eclipse.

The adventure starts . . . from Easter Island!

This most unusual round-trip flight will last 4.5 hours. It will depart from Mataveri International Airport on Easter Island and rendezvous with the moon's shadow 680 miles (1,090 km) north of Easter Island. Along with astronomers and scientists who will use every second to study the darkened sun, there will also be seasoned eclipse chasers on board who, like Schneider, are hopelessly addicted to this spectacle. Indeed, the passenger list will include those who have traveled to 20, 25, even 30 total solar eclipses. Some plan their vacations around these events and have ended up over the years literally circling the globe by way of following the moon's shadow wherever it ultimately falls.

I myself have often been asked, why bother traveling to an eclipse? My answer is always the same: "You must see one for yourself, and then you will understand."

Incidentally, as this is being written, there are several window seats still left on Schneider's amazing flight. If you find this adventure compelling and are interested in possibly coming on board for an once-in-a-lifetime experience, contact Mr. Tim Todd at T.E.I. Global at: http://www.teiglobal.com/contact.html