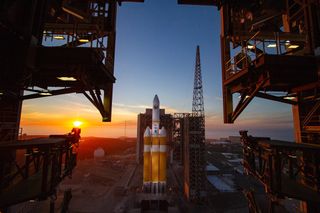 The launch of a clandestine new satellite for the U.S. National Reconnaissance Office was delayed by a last-minute glitch less than 8 seconds before its planned liftoff late Saturday (Dec. 8).

The spy satellite, called NROL-71, was 7.5 seconds from lifting off from California's Vandenberg Air Force Base on a Delta IV Heavy rocket at 11:15 pm EST (8:15 p.m. PST/0415 Dec. 9 GMT) when the problem occurred, according to the United Launch Alliance, which built the rocket.

"The launch of a United Launch Alliance Delta IV Heavy carrying the NROL-71 mission for the National Reconnaissance Office was scrubbed today due to an unexpected condition during terminal count at approximately 7.5 seconds before liftoff," ULA representatives said in a statement. "The team is currently reviewing all data and will determine the path forward. A new launch date will be provided when available." The problem was detected by the rocket's the Terminal Countdown Sequencer Rack, they added. [Stacking Up the World's Tallest Rockets]

The Delta IV Heavy rocket is the most powerful booster in use by the United Launch Alliance, a cooperative launch service by Boeing and Lockheed Martin. The rocket stands 233 feet (71 meters) tall and can launch payloads of up to 14,000 pounds (6,350 kilograms) into geosychronous orbit.