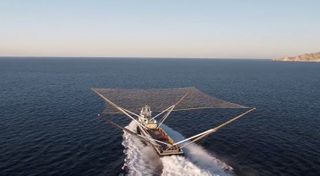 SpaceX's net-equipped boat, Mr. Steven, cruises off the California coast. SpaceX uses the speedy boat to try to catch falling payload fairings, each of which costs $6 million to make. Mr. Steven has not yet managed to snag a fairing, but it has come close several times.
(Image: © SpaceX via Twitter)

SpaceX didn't manage to catch the rocket nose cone that fell back to Earth during Monday's epic launch, but the company plans to reuse the $6 million piece of equipment anyway.

Both halves of the protective payload fairing surrounding the 64 small satellites that were lofted Monday (Dec. 3) by a twice-flown SpaceX Falcon 9 rocket evaded the company's speedy, net-equipped boat, Mr. Steven. The parts instead splashed down in the Pacific Ocean.

But that's not a deal-breaker for reuse, according to SpaceX founder and CEO Elon Musk. [Launch Photos: SpaceX Falcon 9 Lofts 64 Satellites (and Lands) on Historic 3rd Flight]

"Falcon fairing halves missed the net but touched down softly in the water. Mr. Steven is picking them up. Plan is to dry them out & launch again. Nothing wrong with a little swim," Musk said via Twitter, about 90 minutes after the Falcon 9 lifted off from California's Vandenberg Air Force Base on the "SSO-A: Smallsat Express" mission.

Falcon 9 fairing halves are equipped with parachutes and small thrusters, which help nose cones make soft ocean landings. SpaceX has tried to snatch fairings out of the air with Mr. Steven on multiple occasions to keep the gear clear of corrosive seawater, but the boat has missed the catch each time.

Some of these have been very near misses, with Mr. Steven just a few hundred feet from the splashdown site. So, it's unclear at the moment what's different about this recovery — why SpaceX plans to reuse this fairing but passed on doing so with others. (Musk hadn't explained that at the time of this writing.)

Reusability is a key priority for SpaceX, which aims to re-fly its space vehicles frequently and repeatedly. Doing so will slash the cost of spaceflight, potentially making bold feats such as the colonization of Mars economically feasible, Musk has said.

Monday's launch was a milestone in this push, marking the first time that a Falcon 9 first stage had launched on three orbital missions. (SpaceX has never re-flown the upper stage of the two-stage rocket and doesn't plan to do so in the future, Musk said recently.)

The first stage may fly yet again; it aced its landing Monday as well, coming down softly on the deck of the drone ship "Just Read The Instructions," which was stationed in the Pacific Ocean.

SSO-A was also notable for the number of satellites it delivered; 64 is the most ever lofted from U.S. soil during a single launch. The overall record is 104, set in February 2017 by an Indian Polar Satellite Launch Vehicle.