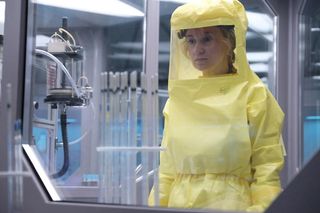 The realities of infection and disease on Mars come to light in Episode 4 of "Mars" Season 2. Marta Kamen shields herself from pathogens with a protective suit.
(Image: © Dusan Martincek/National Geographic)

The second season of National Geographic's "Mars" has started off with a bang. The first three episodes highlighted just how taxing, dangerous and ethically gray life on Mars could be. But Episode 4, which premieres tonight (Dec. 3), makes the realities of life on the Red Planet even more gruesomely apparent.

"Mars," which premiered in 2016, is a docudrama that combines dramatic storytelling with documentary-style interviews. Each episode illustrates how problems that may arise on Mars in the future also exist right here on Earth. But just as we find on our home planet, tackling and solving big problems is often more difficult than we anticipate.

Season 2's fourth episode dives headfirst into the issue of contagion — what happens with a pathogen spreads on the Red Planet? [How Living on Mars Could Challenge Colonists (Infographic)]

Kamen has dedicated her life to finding and studying life on Mars, and the risk of losing samples that could hold undiscovered species is too high for Kamen to bear. So, earlier in the season she takes matters into her own hands to collect samples before they're contaminated by Lukrum. And quickly, the dire consequences of her actions are revealed.

Episode 4 shows the reality of what could happen if a pathogenic, or disease-causing, organism spread on Mars. In particular, the episode explores what might happen if an alien microbe spread on the Red Planet and the human inhabitants weren't equipped to combat the infection.

A number of brilliant scientists live in Olympus Town. But even if they study and understand the dangerous alien microbe, the residents on Mars may not have the materials or pharmaceuticals necessary to combat it. Because the species would be entirely new to humans, it would be impossible to perfectly and completely predict what the crew would need to protect against a potential infection. Additionally, because the inhabitants of Olympus Town are far from Earth, it could take a long time to get help or resources.

These factors are compounded by the close quarters in which the inhabitants of Olympus Town live As a result, if a person is infected, it could spread rapidly and any outbreak on Mars could spread quickly out of control.

Episode 4 also explores how out-of-control outbreaks occur on Earth. The show describes how in the Yamal Peninsula in the icy tundra of northern Siberia, there have been outbreaks of anthrax. A number of people have been infected, and some have died. Climate change is pushing rising temperatures in the area, which continues to melt permafrost in the region in which dangerous microbes like anthrax lie dormant.

As the ice melts, these microscopic organisms "wake up," and the surrounding human communities are not equipped to handle them. Anthrax is a highly infectious bacteria that, when inhaled, can have an 80 percent or higher fatality rate. The outbreaks have affected communities in the Yamal region, especially reindeer herders, along with their reindeer. Rising temperatures continue to increase the threat of infection in the area. But the bureaucratic and political tensions and the fact that the area is remote and difficult to reach make keeping these communities safe a challenge.

Episode 4 of "Mars" mirrors this challenge, as the inhabitants of Olympus Town and Lukrum battle the realities of infection on the Red Planet. For a faraway planet in a tense political position, stopping the spread of bacteria and trying to treat infection is a complex battle.