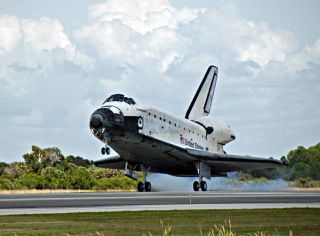 Endeavour kicks up smoke and dust as it touches down at NASA's Kennedy Space Center, making the space shuttle the 65th landing of an orbiter at the site. Photo
(Image: © Kim Shiflett/NASA)

CAPECANAVERAL, Fla. -- The dinged heat shield tiles on NASA's shuttle Endeavourperformed much better than expected during the orbiter's landing today andmarked the only blemish on an otherwise flawless spacecraft, the space agencysaid Tuesday.

"Actuallythe orbiter overall was pretty clean," Griffin said. "We had one kindof ugly ding and we paid appropriate attention to it."

NASAengineers are discussing what typesof modifications, if any, will be required to the shuttle fuel tank bracketthat loosed a 0.021-pound (about one-third of an ounce) piece of foaminsulation during Endeavour's Aug. 8 launch. The debris bounced off a strut tocarve a small ding into Endeavour's belly-mounted heat tiles.

The chippedtile posed no risk to the shuttle or its crew, and weathered the searing heatof reentry remarkably well, NASA said. A first look after landing showed onlyslightly more erosion, not the extensive surface damage predicted by NASAtests, and will be a valuable asset in heat shield analysis, the agency added.

"We'regoing to be able to understand exactly how this stuff performed," BillGerstenmaier, NASA's associate administrator for space operations, in apost-landing briefing. "What is really important is we have kind of abefore and after, which sometimes we haven't had before."

The roboticarm inspection boom and laser tools used to scan Endeavour's dinged tiles wereCanadian in origin and a source of pride for the CSA, Boisvert said.

"It'sprobably the most photographed tile in the world," he added.

Griffin lauded the work of Endeavour'sSTS-118 astronaut crew, which primed the space station for future constructionlater this year.

Commandedby veteran shuttle flyer Scott Kelly, the13-day mission delivered more than two tons of cargo, additional spareparts, a new starboard-side girder and included the replacement of a broken U.S. gyroscope. The shuttle crew landed a day early to avoid any impacts to their Houston,Texas-based Mission Control by Hurricane Dean, though the storm ultimatelyposed no threat to the NASA center.

"Theyjust rolled with the punches and they did a great job," Gerstenmaier saidof the crew's effort to adapt to changes. "They did a flawless job."

Endeavour'screw included teacher-turned-astronautBarbara Morgan, who made her first flight since joining NASA 22 years agoas the backup to Teacher in Space Christa McAuliffe before the ill-fated 1986 Challengermission.

Griffin said Morgan was in good healthafter the spaceflight but required a bit more time to readapt to Earth'sgravity.

"It isan awesome accomplishment that we're in the middle of, we?re not done withit," Griffin said. "Every flight is a hard flight. Every flight is themost important flight, and that will remain so until we're done."