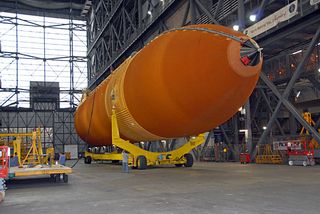 In the Vehicle Assembly Building at kennedy Space Center, the external tank which will be used for the October STS-120 space shuttle mission is being fitted with a crane to lift it into a checkout cell.
(Image: © George Shelton/NASA)

"Theall involve some reduction in the foam around the top of this littlebracket," Hale told reporters in a Monday briefing.

A smallpiece of foam about the size of a baseball fellfrom a bracket on Endeavour's fuel tank roughly a minute after the shuttle'sAug. 8 launch. The shuttle is setto land later today here at the Kennedy Space Center.

The0.021-pound (about one-third of an ounce) foam chunk, which may have containedsome ice, unexpectedly ricocheted off a metal tank strut and gouged a deep, 31/2-inch by 2-inch (9-centimeter by 5-centimeter) long divot in the fragileheat-resistant tiles on Endeavour's belly.

"Wedidn?t think this could happen before," Hale, adding that previous studiespredicted such foam debris would sweep harmlessly past an orbiter."Clearly, we're smarter now than we were a couple of weeks ago."

While theresulting damage was later found to pose no risk to the safereturn of the orbiter or its seven-astronaut crew, NASA has found similar foamshedding events on its last few shuttle flights. The damage from any such foamloss to an orbiter's heat shield is not believed to be catastrophic, like thatwhich led to the 2003 Columbiaaccident, but engineers are analyzing it just to be sure, Hale said.

NASAengineers are already planning to replace the foam-covered brackets on fueltanks, beginning with a planned April 2008 shuttle flight, but discussion isongoing on whether an interim fix will be required. The space agency hascontinually worked to avoid foam debris during liftoff since a chunk of theinsulation tore loose during the 2003 launch of Columbia and led to theorbiter's destruction during reentry.

Trimmingsome unnecessary foam insulation from the brackets or coating them in slicksolution or oil are among the possible modifications under discussion, headded.

Any fueltank modification, if required, is not expected to add a major delay for NASA'splanned Oct. 23 launch of the shuttle Discovery to deliver the new Harmonyconnecting node to the International Space Station.

"It'sa serious problem for us, and we recognize right away that we need to goresolve it before we fly the next mission," Cain said.

But it couldaffect a planned December flight aboard Atlantis to haul the European SpaceAgency's Columbus laboratory to the station, Hale said. That flight has a slim,week-or-so long window that opens Dec. 6 in which to launch towards the spacestation, he added.

NASA has arelatively tight schedule of at least 11 more shuttle flights planned tocomplete space station construction by September 2010, when the agency'sthree-orbiter fleet is slated for retirement

Nevertheless,engineers will evaluate shuttle fuel tank safety between flights to identifywhat type of fix, if any, will be ultimately required, NASA said.

"It'sjust another day at the office," Hale said. "This is the kind of workthat we're into if we want to fly this vehicle throughout its manifest."