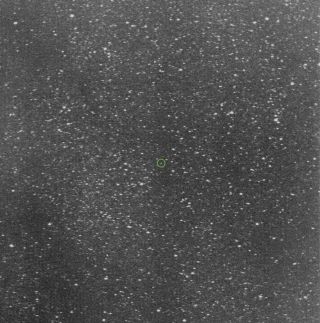 After a huge team of engineers has spent years building a $800 million spacecraft, you want to be sure the craft doesn't bang into anything before it even gets a chance to start work in earnest.

That's NASA's thinking with the agency's OSIRIS-REx mission, which is headed to explore an asteroid called Bennu and learn more about the earliest days of the solar system. So, while the spacecraft was still 620,000 miles (1 million kilometers) away from its target, it took a moment to check for any cosmic debris that could threaten a collision.

The mission team is worried about two types of potential threats: dust plumes and tiny moons. The first safety check focused on dust plumes, which would be caused by material flying off Bennu or its neighbors. The search came up clean, and the spacecraft is continuing at its planned pace toward its destination.

But there will be more safety checks to come. Later this year, the spacecraft will look for any natural satellites that may be orbiting Bennu — tiny moons as small as 4 inches (10 centimeters) across. If OSIRIS-REx instruments spot any such moons, the probe will stop 25 to 30 miles (40 to 50 km) away from its eventual target to gather more data and ensure the approach can continue safely.

A third scan early next spring, when OSIRIS-REx will be just 3 miles (5 km) away from the asteroid, will check again for any plumes before the spacecraft continues dancing ever closer to its rocky target.

But despite the risk inherent in navigating around a moon or a plume, the OSIRIS-REx team wouldn't necessarily be upset to discover either or both of those things in the spacecraft's path. These objects would provide new and intriguing data about this neighborhood of the solar system and its history, NASA said.

The all clear from the spacecraft's first safety check means that OSIRIS-REx can continue its journey. In another recent development, the spacecraft successfully shed a cap that was protecting the probe's sampling arm. This means that once OSIRIS-REx finally arrives, it will be ready to get down to business.