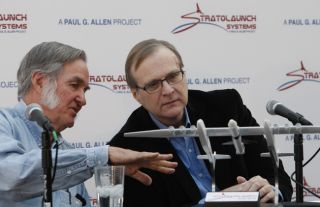 The death of billionaire technologist, philanthropist and private-spaceflight entrepreneur Paul Allen has hit hard for people from many different walks of life.

Allen passed away yesterday (Oct. 15) at the age of 65 from complications of non-Hodgkin lymphoma. Though he was best known for co-founding Microsoft, Allen was also an important figure in both the spaceflight and search for extraterrestrial intelligence (SETI) communities.

For example, he bankrolled the SpaceShipOne project, which built the first private, crewed vehicle to reach space. In fact, SpaceShipOne made it to space twice in less than two weeks in 2004, an achievement that won the project team — consisting of Allen and the California-based company Scaled Composites, which was founded by aerospace engineer Burt Rutan — the $10 million Ansari X Prize. SpaceShipOne isn't flying anymore, but its design lives on: Virgin Galactic's SpaceShipTwo suborbital space-liner is based on the pioneering experimental craft. [How Virgin Galactic's SpaceShipTwo Passenger Space Plane Works (Infographic)]

And in December of 2011, Allen and Rutan unveiled a new company called Stratolaunch Systems, which aims to air-launch satellites using a gigantic plane. This craft is the largest airplane ever built, featuring a wingspan of 385 feet (117 meters).

"Mr. Allen's financing of the Tier One project that won the Ansari X Prize with SpaceShipOne led to broad investment in a new generation of space-technology entrepreneurs," the nonprofit Commercial Spaceflight Federation said in a statement after Allen's death. "He was passionate about pushing the innovation envelope and motivating achievements beyond what was initially envisioned, ultimately for the betterment of humankind. Mr. Allen's pioneering entrepreneurial spirit will live on as we continue to surpass space technology milestones in his memory."

Then, there are Allen's contributions to the SETI effort. He provided the seed money for the Allen Telescope Array (ATA), a 42-dish network in Northern California that listens for possible signals from alien civilizations. Allen eventually donated more than $30 million to the ATA project, officials with the SETI Institute in Mountain View, California, have said.

"Sadly, Paul Allen passed away this afternoon. I'm sorry that he won't get to see all the things that the Allen Telescope Array will [yet] do," radio astronomer and SETI Institute co-founder Jill Tarter said via Twitter yesterday.

These thoughts from Tarter and the Commercial Spaceflight Federation are just a tiny sampling of the tributes and remembrances for Allen that prominent people have expressed over the past 24 hours. You can read a few more below. (Again, this is far from an exhaustive list. Allen also owned the NFL's Seattle Seahawks and the NBA's Portland Trail Blazers, established various scientific-research and ecological-conservation groups, and donated to many different causes over the years. So, the outpouring of respect has been huge across many segments of society.)