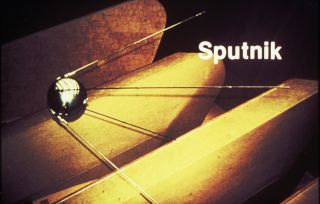 Calling all space fans! World Space Week starts today (Oct. 4), kicking off a weeklong celebration of space activities around the globe — and even out at sea.

This year marks the 19th annual World Space Week, which honors two seminal events in space exploration: The launching of the first satellite, Sputnik 1, on Oct. 4, 1957, and the signing of the Outer Space Treaty on Oct. 10, 1967, which forms the basis for international space law.

"World Space Week was declared by the United Nations General Assembly in 1999," Dennis Stone, World Space Week Association president, said in a statement. "Since then, it has grown to be the largest space celebration on Earth." [Sputnik 1! 7 Fun Facts About Humanity's First Satellite]

Last year, a total of 3,700 events were held across 80 countries during the weeklong celebration. The festivities commemorate international contributions to space science and technology as well as how exploring the cosmos has impacted humanity.

"It was inspired by UNISPACE+50, an historic gathering of world space leaders held in June this year," according to World Space Week officials. "This event paved the way for strengthened cooperation between spacefaring and emerging space nations and will help space activities become more inclusive on a global scale."

Activities this year include educational talks about STEM topics, stargazing opportunities and a special preview of the second season of National Geographic's "Mars" series at several locations across the United States. And every day, IMAX will also release through social media channels a series of mini space documentaries and short interviews with astronauts.

Space agencies, aerospace companies, schools, museums and astronomy clubs around the world are expected to participate in thousands of events for World Space Week this year. Since the full schedule for the week is long, Space.com has only listed some event highlights below.

On Saturday, Oct. 6, the Museum of Flight in Seattle will host a special event to celebrate NASA's 60th anniversary. Bill Barry, NASA's chief historian, will give a presentation about the history and achievements of NASA, and what the agency hopes to accomplish in the future.

A robotics experiment will be held in Eagan, Minnesota, on Saturday, Oct. 6. Using only a plastic bottle, vinegar and baking soda, students will have the opportunity to test out different rocket designs and fuel ratios to see what launches the farthest. Students in Galway, Ireland, will also be designing and launching rockets once a day from Oct. 1 to Oct. 5, in honor of World Space Week. (Here's how to launch your own rockets with Alka-Seltzer and film canisters.)

The weeklong space-themed transatlantic cruise will sail from New York and arrive in Southampton, U.K., on Oct. 14. Queen Mary 2 is also home to a high-tech planetarium, which will offer special space-themed shows.

The European Space Agency will host its annual Open Day event at its European Space Research and Technology Centre in the Netherlands on Sunday, Oct. 7. The event will feature astronauts, scientists and engineers, who will take guests behind the scenes and describe how space technologies are designed and even demonstrate the processes that go into executing a mission.

For a full list of World Space Week activities, or to find an event near you, visit www.worldspaceweek.org.