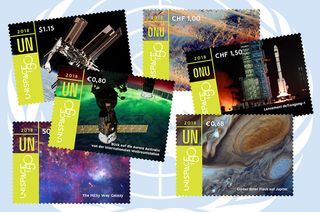 The United Nations Postal Administration (UNPA) on June 20, 2018 will release postage stamps celebrating the 50th anniversary of UNISPACE, the first conference on the exploration and peaceful uses of outer space.
(Image: © UNPA via collectSPACE.com)

A new set of postage stamps to be issued this month will mark the half century since the world first came together to discuss the peaceful uses of outer space.

The United Nations Postal Administration (UNPA) will release six commemorative stamps celebrating the 50th anniversary of the first Conference on the Exploration and Peaceful Uses of Outer Space. UNISPACE I, held in Vienna, Austria in 1968, brought together 78 countries to discuss the potential benefits of space exploration for all humankind.

The new postage stamps, to be issued June 20 in Geneva, New York and Vienna, coincide with UNISPACE+50, a special segment of the 61st session of the United Nations' Committee on the Peaceful Uses of Outer Space (COPUOS) in Austria. [In Photos: Space Age Postage Stamps Through History]

"I am sure all of you who collect space-themed stamps will be intrigued by these stunning designs, which highlight humankind's achievements in space," Thanawat Amnajanan, UNPA chief, wrote in the postal administration's Philatelic Bulletin.

The six stamps, which will be issued in pairs with U.S. dollar, Swiss franc and Euro denominations, depict images related to human spaceflight and space technology, as well as Earth observation and space exploration. Each 1.4-by-2-inch (35-by-50-millimeter) stamp comes 20 to a sheet.

Two of the stamps show the International Space Station.

A $1.15 stamp reproduces a 2011 photograph captured by Italian astronaut Paolo Nespoli of the space shuttle Endeavour docked with the orbiting laboratory. And a € 0,80 stamp reproduces an image of Russian Soyuz and Progress spacecraft set against the green glow of the Aurora Australis as taken by a member of the space station's Expedition 29 crew also in 2011.

A CHF 1,00 stamp depicts Egypt as seen from aboard the space station by NASA astronaut Scott Kelly during his year in space in 2015. "Your colors never cease to amaze!" Kelly wrote, captioning the photo when he originally shared it on Twitter.

A CHF 1,50 stamp shows the launch of Tiangong-1, China's first prototype space station, on Sept. 29, 2011. The small space lab, which hosted two crews of three Chinese taikonauts each, fell back to Earth and was destroyed in April 2018.

A € 0,68 stamp presents the Great Red Spot on Jupiter. The photo of the large swirling storm was assembled from three frames transmitted by NASA's Voyager 1 interplanetary probe in 1979.

A sixth stamp in the set, a 50-cent issue, depicts the Milky Way galaxy. The photo, which is focused on an area around the galaxy's center, is a composite of images in X-ray, optical and infrared wavelengths. [Related: USPS Unveils Sally Ride Postage Stamp]

Three "souvenir sheets" will offer three additional stamps, including a $1.15 issue depicting Scott Kelly during a spacewalk outside the International Space Station; a CHF 2,00 stamp showing the comet 65P/Gunn as captured by NASA's Wide-field Infrared Survey Explorer (WISE); and a € 1,70 stamp showing the eastern edge of the Sundarbans in Bangladesh as taken by the European Space Agency's (ESA) Sentinel-2A satellite in 2016.

In addition to the stamps, the UNPA has also produced three special postmark devices for the UNISPACE+50 set's first day of issue. The New York cancellation features a meteor entering the atmosphere of a planet; the Geneva device shows a solar system; and the Vienna postmark depicts a telescope.

The UNPA will offer 14 different first day covers, or stamped envelopes canceled on the day of release, using the pictorial postmarks and new issues. Each of the six stamps will be printed in quantities between 70,000 and 90,000. The souvenir sheets will be limited to 22,000 to 27,000 sheets.

The stamps were created by UNPA art director Sergio Baradat. His previous work has included a 2013 set of stamps themed around photographs of nebula.