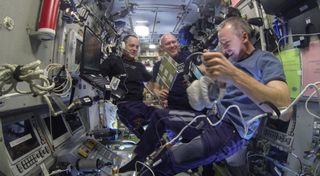 Two NASA astronauts and one Russian cosmonaut will return from the International Space Station early Thursday morning (Oct. 4), and you can watch their departure and landing live online.

NASA astronauts Drew Feustel and Ricky Arnold and Russian cosmonaut Oleg Artemyev are scheduled to touch down on the steppe of Kazakhstan at 7:45 a.m. EDT (1145 GMT). The agency will provide live coverage of the crew's departure and landing beginning at 12:30 a.m. EDT (0430 GMT), and you can watch it live here on Space.com, courtesy of NASA TV.

After saying farewell to their Expedition 56 crewmates — NASA astronaut Serena M. Auñón-Chancellor, German astronaut Alexander Gerst and Russian cosmonaut Sergey Prokopyev — the departing trio will board the Soyuz MS-08 spacecraft and close the hatch at 12:55 a.m. EDT (0455 GMT). About 3 hours later, the spacecraft will undock from the station's Poisk module at 3:57 a.m. EDT (0757 GMT). [Expedition 56: The Space Station Mission in Photos]

Three hours after separating from the space station, the Soyuz will begin its deorbit burn at 6:51 a.m. EDT (1051 GMT), sending the spacecraft plunging into Earth's atmosphere. After a fiery re-entry, the ship will parachute down to its target landing site southeast of the remote town of Dzhezkazgan, where recovery crews will meet the astronauts.

Feustel, Arnold and Artemyev launched to the space station on March 21 and will have spent 197 days in space as members of Expeditions 55 and 56 when they return home. By the end of their mission, they will have circled planet Earth 3,152 times and traveled 83.4 million miles (134 million kilometers), NASA officials said in a statement. "During their time on the orbiting laboratory, the crew of Expedition 56 carried out science experiments ranging from physics to biological studies and conducted tests to expand navigation capabilities in preparation for future travel far from Earth," NASA officials said.