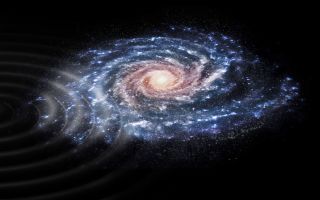 Did an ancient encounter with a nearby galaxy throw millions of Milky Way stars out of alignment? Astronomers investigate in a new study.
(Image: © ESA)

The Milky Way has a violent past. When it isn't swallowing renegade sausage galaxies, it seems to be waging endless games of interstellar tug-of-war with its nearest galactic neighbors — and not always winning. According to a new study published Sept. 19 in the journal Nature, one such encounter ended with a cosmic wound to the Milky Way's disk that still hasn't fully healed, 300 million years later.

That wound, researchers say, is visible in a cluster of several million stars that are not behaving as they should be. While still rotating around the Milky Way's galactic center, these rogue stars also orbit around one another in a wobbly, spiral pattern that has only become more tangled over the past eon. [Big Bang to Civilization: 10 Amazing Origin Events]

"We have observed shapes. [of star clusters] with different morphologies, such as a spiral similar to a snail's shell," lead study author Teresa Antoja, a researcher at the Institute of Cosmos Sciences (ICCUB) at the University of Barcelona, said in a statement. "These substructures allow us to conclude that the disk of our galaxy suffered an important gravitational disturbance."

Antoja and her colleagues spied the signs of this cosmic battle scar while studying the treasure map of star data shared earlier this year by the European Space Agency's Gaia satellite. Gaia provided scientists with the most detailed picture of our galaxy yet, offering the precise locations and velocities of more than 1.7 billion stars in the Milky Way. Antoja and her team noticed that one cluster of stars in the galactic disk swirled in a pattern distinct from that of its interstellar neighbors, and the researchers suspected some intergalactic mischief was afoot.

To investigate what happened, the researchers used velocity and position data for 6 million stars to mathematically unwind the Milky Way's mysterious galactic snail shell. Their models showed that the disturbance that wobbled these stars' orbits likely occurred between 300 million and 900 million years ago.

According to the researchers, one possible explanation is that a smaller, satellite galaxy swooped past the Milky Way sometime during that period, and the visitor's considerable gravity accidentally tugged the affected stars out of step. [Stunning Photos of Our Milky Way Galaxy]

The Sagittarius dwarf galaxy — a ring-shaped galaxy of several tens of billions of stars that arc around the Milky Way — is a strong suspect in this case of intergalactic meddling. Previous research suggests that the Sagittarius galaxy indeed made a close pass to the Milky Way's disk between 200 million and 1 billion years ago, well within the time frame for the mysterious disturbance.

If that hypothesis is correct, the event would have played out a bit like a tiny magnet skirting past a giant ring of iron filings. Sagittarius (the magnet) could've come close enough to the Milky Way to overpower several million stars (the filings) with its gravity, subsequently tugging those stars out of their regular orbits before moving out of range again. The stars that Sagittarius affected continued orbiting as part of the Milky Way, only now on a permanently altered trajectory.

"It is a bit like throwing a stone in a pond, which displaces the water as ripples and waves,"Antoja said in an interview with the European Space Agency.

A few hundred million years after the mysterious disturbance stirred the broth of stars, astronomers can still see the effects of the incident when they try to map the Milky Way. The swirling, shell-shaped cluster of stars still holds its unusual form when observed in Gaia graphics today.

But don't worry: If you have home-galaxy pride, take heart that the Milky Way's revenge on Sagittarius may be swift. Scientists now believe that our galaxy is slowly absorbing the stars of Sagittarius and, within the next 100 million years or so, will rip it to shreds. Touché!