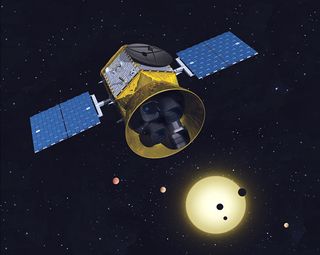 Scientists poring over data from NASA's newest planet-hunting telescope have announced that they've spotted a second possible planet, just three days after many of the same team members announced their first find.

The two potential planets are the beginning of a discovery bonanza that scientists have calculated may hit 10,000 worlds within just two years. Both come from the first month of observation time from the instrument — called the Transiting Exoplanet Survey Satellite (TESS) — which changes position each month to better survey the sky.

"A second @NASA_TESS candidate planet has been discovered!" scientists with the mission announced on Twitter Thursday (Sept. 20). Slightly bigger than Earth, this planet orbits LHS 3844, a M dwarf star 49 light-years away, every 11 hours. This find is being reviewed by other scientists, and we're looking forward to studying this cool "hot Earth." [NASA's TESS Exoplanet-Hunting Mission in Pictures]

The newly spotted planet candidate is orbiting a star called LHS 3844, a small, faint star called a red dwarf. That makes the new world one of the closest known exoplanets to Earth, as LHS 3844 is 49 light-years away, the scientists reported in a new study.

On this strange world, which is about a third again as large as Earth, a year lasts just 11 hours. That short year means the planet is uncomfortably close to its star, so it likely experiences too much radiation and solar flares for the planet to be habitable, the authors wrote.

But even if we wouldn't want to live there, it would sure be nice to know more about it. The research team also used ground-based telescopes to study the star system as a way to verify that the signal they were picking up wasn't just a fluke. That also gave them a sense of the planet's surface temperature — almost 1,000 degrees Fahrenheit (531 degrees Celsius).

Because of the exoplanet candidate's high temperature and proximity to its star, scientists are particularly curious whether the planet can cling to an atmosphere so close to its star. If it does have an atmosphere, that would also suggest the planet formed farther away and then crept up to its star after that star aged out of its early tantrums and quieted down as stars do, the authors wrote. The star's proximity to Earth means the observations necessary to study its atmosphere may very well be possible, they added.

TESS moved on to its next patch of the sky in late August, and that survey should finish up late this month. Once that data comes back to Earth, it, too, will spur a string of tentative planet identifications as the telescope continues to accomplish the job it was designed to complete.

The new planet candidate, which will now be considered and studied by other scientists to see whether it truly is a planet, is described in a paper posted yesterday (Sept. 19) to the preprint server arXiv.org and submitted to the Astrophysical Journal Letters.