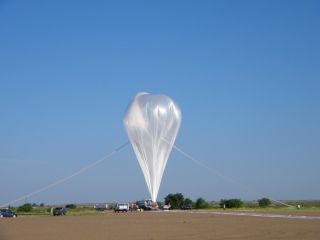 NASA's gigantic, ultrathin balloon, known as the "Big 60," broke a record for highest balloon altitude maintained during flight when it took to the skies last month.

NASA officials said the Big 60 set a new sustainable-altitude record by reaching 159,000 feet (48,500 m) during an 8-hour flight on Aug. 17, traveling into Earth's stratosphere and ascending about 5 miles (8 km) higher than the next-largest balloon prototype. [You 'Knead' to See Garlic Bread Fly into the Stratosphere, Then Get Eaten! (Video)]

As "NASA's largest zero pressure balloon to date," officials said, Big 60 was capable of such a feat because of its enormous size and delicate skin.

"If all of the polyethylene material were spread out on the ground, it would be enough to cover about 20 acres [8 hectares] of land," space agency officials said in the statement.

In addition to its size, the Big 60's thin film, or balloon skin, supported the accomplishment by withstanding temperatures as low as minus 130 degrees Fahrenheit (minus 90 degrees Celsius) — though Earth's stratosphere is, on average, much warmer, at minus 76 degrees F, or minus 60 degrees C, officials said. They described the film as a "little less than the thickness of kitchen plastic wrap.''

Future tests will help researchers discern which science missions and new instruments would benefit from hitching a ride on the Big 60. Sarah Fischer, a technologist at the Wallops Balloon Research and Development Lab, said in the statement that the Big 60 can potentially lift a payload as heavy as a small four-wheeler.

But the Big 60 did carry its own experiments, officials said: Two student payloads in NASA's Undergraduate Student Instrument Project and a larger, interplanetary cubesat-antenna experiment from the University of Arizona ascended on the Aug. 17 flight, floating for 8 hours.