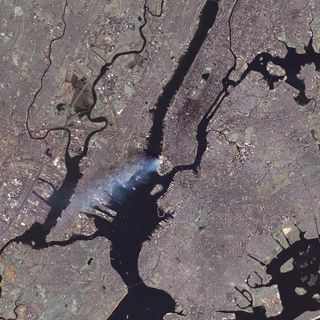 A plume of smoke rises from what had been the site of the World Trade Center in New York City at 11:30 a.m. on Sept. 12, the day after two planes crashed into the Twin Towers during a terror attack.
(Image: © USGS/EROS)

Seventeen years after 9/11, NASA is commemorating the anniversary of the tragic terror attacks with new photos of New York City and Washington taken from space.

"Today, we remember the victims, survivors and heroes of #September11th," NASA tweeted, along with a new photo of New York City captured by NASA astronaut Ricky Arnold at the International Space Station on June 19.

Arnold's image shows the site where the World Trade Center stood before two planes crashed into the Twin Towers. A new tower, One World Trade Center, was built near the Ground Zero memorial. The new view offers a stark contrast to the images of debris, dust and smoke seen from space for days after the attacks. [9/11 Remembered in Space Photos]

In another photo from the space station, you can see the Pentagon in Arlington County, Virginia, just across the bridge from Washington. European Space Agency astronaut Thomas Pesquet captured this photo on April 11, 2017.

At the time of the attacks, NASA astronaut Frank Culbertson was the only American not on planet Earth. He saw the smoke while at his post on the International Space Station and began documenting the event from his unique vantage point about 250 miles (400 kilometers) above the Earth.

"The world changed today," Culbertson wrote in a public letter published shortly after the attacks. "What I say or do is very minor compared to the significance of what happened to our country today when it was attacked."

You can see more astronaut and satellite photos of the 9/11 attacks as seen from space and read more reflections from NASA in this blog post.