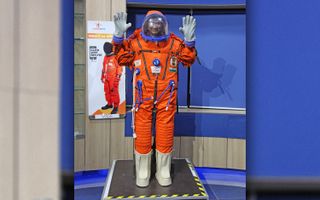 India's space agency is designing a spacesuit for its astronauts to wear on trips off Earth; this spacesuit was displayed in August.
(Image: © Pallava Bagla/Corbis/Getty)

The Indian Space Research Organisation showed off the spacesuit it has designed in-house for its first human space missions at an event held on Sept. 6.

The display comes weeks after the country announced an ambitious timeline to launch its first crewed mission by 2022 in time to commemorate the 75th anniversary of the country's independence. The human-spaceflight program is called Gaganyaan and will build on the legacy of India's first astronaut, Rakesh Sharma, who flew in 1984. But this time, India is developing every aspect of the program, which means tackling problems like spacesuit design. [The Evolution of the Spacesuit in Photos]

According to reports by Indian news publications, the agency has already manufactured two of the bright-orange suits and will build a third before crewed flights begin. During the presentation last week, a suit was displayed with text explaining that it is made of four layers and weighs less than 11 lbs. (5 kilograms).

The spacesuits, which have been in the works for two years, are each equipped with an oxygen cylinder that can support an astronaut for an hour, local reports added.

The first crewed flight in the program is expected to last between five and seven days and carry three astronauts into orbit.