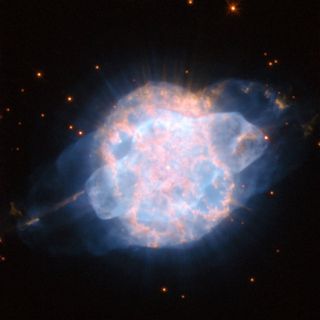 Planetary nebula NGC 3918 shines bright like a cosmic eye. It's found in the southern sky, within the constellation Centaurus.
(Image: © ESA/Hubble & NASA)

Many people enjoy gazing at the night sky, and once in a while, something up there appears to look right back at us.

Planetary nebula NGC 3918 shines brightly in a dazzling new photo that NASA described in a statement Aug. 24. The space agency calls the nebula a "celestial eye," and a little creativity makes it easy to see why: The rounded and expanded clouds of dust and gas look like a fluorescent iris in the heavens, the white dwarf shining brightly in the center could pass as a glimmering pupil, and the whisker-like edges resemble cosmic eyelashes.

Stars like the sun will likely end up as planetary nebulas when they die. And as spectacular as these formations are, they're gone in a cosmic blink of an eye. Planetary nebulas like NGC 3918 exist for just a few tens of thousands of years, according to NASA. [Spectacular Nebula Photos from Deep Space]

This nebula is found in the southern sky about 4,900 light-years from Earth, within the constellation Centaurus (the centaur), and its irregular shapes are still not fully explained.

The Hubble Space Telescope's Wide Field Planetary Camera 2 took this image, released Aug. 2, 2010, which shows different regions of glow. The bright innermost shell contrasts with the softer-colored outer shell, and according to Hubble representatives, studies show these are ejections that formed at the same time but are moving away from the star at different speeds.

In addition, mighty jets of gas stream from the ends of the nebula; scientists estimate that this gas is speeding across space at speeds of about 218,000 mph (350,000 km/h).