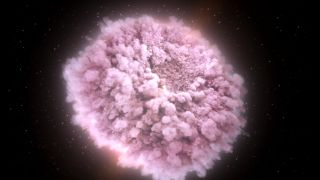 The first-ever observations of merging binary stars stunned the astronomy community last year, but not quite as much as the first-ever signal from extraterrestrial life might someday stun the world.

And a new paper argues that the observations of an binary-star merger may actually be the key to making that second detection, which is the ongoing quest of a scientific effort called the search for extraterrestrial intelligence, or SETI.

"We were really impressed by the rapid growth of multi-messenger astronomy associated with [the neutron star merger detected last August], and started thinking about interesting possibilities far beyond traditional astronomical studies," lead author Yuki Nishino, a physicist at Kyoto University in Japan, wrote in an email to Space.com. "Actually, previously, we were not familiar with the SETI activities." [9 Strange, Scientific Excuses for Why Humans Haven't Found Aliens Yet]

So, he and his co-author started considering how a technologically advanced alien civilization beyond our galaxy might piggyback on the bright signals created by colliding neutron stars to catch our attention.

Their basic idea is that aliens would have the ability to predict the merger of a binary neutron star elsewhere in their own galaxy with plenty of warning. We can sometimes do that now, the pair wrote, because many neutron stars are pulsars, which produce a spinning jet of light. That means we can track where they are and how they are interacting in binary systems.

Next, the aliens would need to produce a signal timed around that collision. Scientists have already started dreaming up space-based gravitational-wave detectors they believe could observe a collision years in advance; they already turn all the telescopes at their command toward a collision after it's been registered. That means aliens may be able to catch our attention with an artificial signature before, after or both before and after the natural collision signal.

It would need to be quite a powerful signal, given that the study is focused on civilizations beyond our own galaxy, requiring long travel times even at the speed of light. The pair calculated that for aliens 130 million light-years away from Earth, the feat would require feeding a telescope like the Square Kilometer Array (currently being built) about a terawatt of power. (For context, Earth's total power consumption in 2015 was 17.4 terawatts, by one calculation.)

Of course, all this assumes that our still-hypothetical distant neighbors want to reach out to us, and there's no way to know how valid that assumption is. Nishino thinks outreach is inevitable. "I think one of the basic grounds for developing an advanced civilization is a profound desire to leave behind information," he wrote in his email. He added that it may well be safer in a scenario like his, where alien and correspondent civilizations are in two separate galaxies buffered by vast distances.

But for Nishino, what's compelling about this approach to the search for extraterrestrial intelligence is that it relies on observations that are being gathered anyway. When word got out about the initial gravitational-waves detection from colliding neutron stars, astronomers around the world hustled to turn telescopes in all sorts of wavelengths toward the event. Nishino wants to ask them to look through the data with SETI in mind as well — which is much easier than gathering separate data for the hunt.

The research is described in a paper published on Aug. 1 in The Astrophysical Journal Letters.