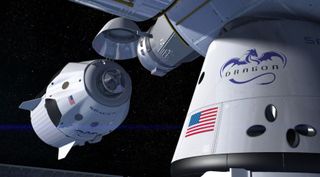 An illustration of a SpaceX Crew Dragon spacecraft docking with the International Space Station. NASA says it has accepted plans to allow the use of "load-and-go" fueling for Crew Dragon missions.
(Image: © NASA)

WASHINGTON — NASA announced Aug. 17 that it will allow SpaceX to use a fueling approach for its commercial crew missions that attracted prior scrutiny, pending a final series of tests.

In a statement published late Aug. 17, the agency said that it was allowing SpaceX to move ahead with plans to use what's colloquially known as "load-and-go," where the Falcon 9 launch vehicle is filled with liquid oxygen and kerosene propellants after astronauts board the Crew Dragon spacecraft on top of the rocket.

"To make this decision, our teams conducted an extensive review of the SpaceX ground operations, launch vehicle design, escape systems and operational history," Kathy Lueders, NASA's commercial crew program manager, said in the statement. "Safety for our personnel was the driver for this analysis, and the team's assessment was that this plan presents the least risk." [Take a Walk Through SpaceX's Crew Dragon Spaceship]

SpaceX uses load-and-go for its satellite and cargo Dragon missions currently, starting the fueling process just 35 minutes before liftoff. The company has adopted that approach because it uses "supercooled" propellants that are denser, improving the vehicle's performance.

That approach, though, attracted scrutiny after the September 2016 explosion of a Falcon 9 on the pad at Cape Canaveral during preparations for a static-fire test prior to the planned launch of the Amos-6 spacecraft. That accident, which destroyed the launch vehicle and satellite, was blamed on the failure of a composite overwrapped pressure vessel in an upper stage propellant tank.

Thomas Stafford, the former astronaut who chairs NASA's International Space Station Advisory Committee, criticized plans to use load-and-go for crewed missions shortly after that accident. He noted that it was contrary to past NASA human spaceflight programs, where the launch vehicle was fueled first.

Stafford had questioned the approach prior to the pad explosion. "There is a unanimous, and strong, feeling by the committee that scheduling the crew to be on board the Dragon spacecraft prior to loading oxidizer into the rocket is contrary to booster safety criteria that has been in place for over 50 years, both in this country and internationally," he wrote in a December 2015 letter. That letter got renewed attention after the accident, when Stafford said at an October 2016 meeting of the committee that he had yet to receive a response.

NASA noted at the time that it was the Aerospace Safety Advisory Panel (ASAP) that was the primary advisor for commercial crew safety, and Stafford's committee no longer pursued the issue. ASAP, at a May 2018 meeting, concluded after reviewing engineering reports by NASA that load-and-go was a "viable" approach for commercial crew missions.

"It appears that, if all the appropriate steps are taken and it addresses the potential hazards, the risk of launching crew in the load-and-go configuration could be acceptable," said Patricia Saunders, chair of the panel, during ASAP's May 17 meeting.

Those comments came a week after SpaceX Chief Executive Elon Musk said he was not worried about NASA rejecting SpaceX's load-and-go approach. "I think that issue has been somewhat overblown," he said, noting that SpaceX could, if needed, fuel the Falcon 9 before boarding astronauts. "But I don't think it's going to be necessary, any more than passengers on an aircraft need to wait until the aircraft is full of fuel before boarding."

NASA noted in its statement, though, that formal certification of load-and-go is pending "additional verification and demonstration activities." That will include five "crew loading demonstrations" to test the crew loading procedures. Those tests will be carried out prior to the first crewed flight of the vehicle, a demonstration mission carrying two NASA astronauts currently scheduled for April 2019.