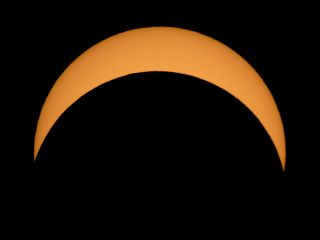 The moon partially obscures the sun during the total solar eclipse of Aug. 21, 2017 in this NASA photo by Bill Ingalls. On Aug. 11, 2018, a partial solar eclipse will be visible most of Asia, far northern Europe, Iceland and Greenland, as well as from a slice of northern and eastern Canada.
(Image: © NASA/Bill Ingalls)

What a difference a year makes! Just over a year ago, millions across North America were anxiously awaiting the "Great American Solar Eclipse" of Aug. 21. Now, on Saturday (Aug. 11), another eclipse of the sun will take place, but it's quite likely that the prospective viewing audience will be considerably smaller.

This weekend's solar eclipse will be a partial eclipse of the sun, not the spectacular total solar eclipse that thrilled millions last year. It will be visible from most of Asia, far northern Europe, Iceland and Greenland, as well as from a slice of northern and eastern Canada.

In fact, parts of Newfoundland and Labrador and Quebec (along the lower north shore of the Gulf of St. Lawrence) will get a brief glimpse of a tiny "dent" out of the sun's upper-left edge for some minutes immediately after sunrise. [Solar Eclipses 2018: When and How to See Them]

You can find local viewing details for 29 locations in the visibility area here, courtesy of veteran NASA eclipse scientist Fred Espenak of EclipseWise.com.)

You can see the viewing times for a few locations in Newfoundland and Quebec in the table below. The eclipse begins before sunrise.

The time of greatest eclipse, with nearly 75 percent of the sun hidden, will occur at local sunset in Russia from Kolyuchinskaya Bay in far northeast Siberia — a large, usually ice-covered bay in the Chukchi Sea on the northern shore of the Chukotka Peninsula. Cape Vankarem is to the west, and Neskynpil'gyn Lagoon and Cape Serdtse-Kamen are to the east.

It's not the kind of place to take your family on a weekend adventure!

Solar eclipses occur when the moon passes across the face of the sun, as viewed from Earth.

When the moon completely covers the sun, it creates a total solar eclipse, casting a shadow of the moon across the Earth's surface. Sometimes, the moon only partially covers the sun, creating a partial solar eclipse, or doesn't completely obscure the sun (an annular, or "ring of fire," eclipse). Because the moon's orbit is tilted, it does not always block the sun as it circles the Earth each month.

(The video above was created by Larry Koehn of ShadowsandSubstance.com.)

In case you haven't been keeping track, this will be the third eclipse in less than a month.

During the lunar eclipse, the moon crossed the ecliptic — the apparent path of the sun in our sky — while at full phase on July 27, resulting in our natural satellite passing through the shadow of the Earth (hence the total lunar eclipse). We call that crossing point a "node." Also during that eclipse, the moon crossed the ecliptic going from north to south, the descending node of its orbit.

Because of the moon's orbit, either two weeks before or after a total lunar eclipse, the moon reaches the opposite side of its orbit and crosses the ecliptic again — this time, at new-moon phase — resulting in an eclipse of the sun. So that's two eclipses, one solar and one lunar, linked by the moon's orbit. [The Phases of the Moon Explained]

We call this an eclipse season.

But so central was the July 27 lunar eclipse, with the moon passing almost directly through the middle of Earth's shadow, that it allowed for not just one, but two partial solar eclipses: one that occurred two weeks before the lunar eclipse, and another on Aug. 11 (two weeks afterward).

So we get three eclipses occurring during this 29.53-day synodic lunar month, where normally we would have only two.

Almost too early for an eclipse

That is, 20 hours after crossing the ecliptic, the moon arrives at new phase. But by then, the axis of its shadow passes well to the north of Earth. Because the moon is near perigee (the point closest to Earth in the moon's orbit), the dark shadow cone of the moon — called the umbra — tapers to well beyond us (by a distance of approximately three times Earth's radius), but also completely misses touching our planet, passing 4,500 miles (7,300 kilometers) above the North Pole.

So, unlike last year, no place on Earth will see the glorious spectacle of a total solar eclipse. Instead, the moon's outer shadow (the penumbra) will brush the top of our globe, creating a far more modest partial eclipse.

There is one sun-related coincidence during Saturday's partial solar eclipse: By sheer luck, the solar eclipse will occur on the same day that NASA will launch the Parker Solar Probe to the sun.

The Parker Solar Probe will fly faster and closer to the sun than any other spacecraft. It will actually "touch" the sun, flying through the star's outer atmosphere, called the corona. The corona is the brilliant ring of light that is visible around the moon during a total solar eclipse, and scientists hope the Parker Solar Probe will help answer long-standing mysteries about the region.

Editor's note:If you live in the visibility zone for the partial solar eclipse of Aug. 11 and you snap a photo of the event, let us know! You can send your images and comments to spacephotos@space.com.

Joe Rao serves as an instructor and guest lecturer at New York's Hayden Planetarium. He writes about astronomy for Natural History magazine, the Farmers’ Almanac and other publications, and he is also an on-camera meteorologist for Verizon FiOS1 News in New York’s Lower Hudson Valley. Follow us @Spacedotcom, Facebookand Google+. Original article on Space.com.