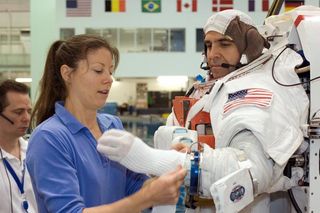 Two veteran astronauts are gearing up to upgrade the International Space Station (ISS) once their space shuttle Endeavour arrives at the orbital laboratory later this week.

If all goes as planned, Endeavour's STS-118 mission specialists Rick Mastracchio and Dafydd "Dave" Williams will stage up to four spacewalks outside the ISS to install a new piece of starboard-side framework, spare parts, as well as make some repairs. The excursions will mark the first career spacewalks for both seasoned spaceflyers.

"It's a really great opportunity that I have to be able to do this mission," said Williams, who represents the Canadian Space Agency and hopes to lead one of the mission's four possible spacewalks. "Being able to lead a spacewalk is a tremendous amount of responsibility."

Mastracchio, Williams and five crewmates are set to launch towards the ISS at 6:36 p.m. EDT (2236 GMT). Their STS-118 crew also includes mission specialist Barbara Morgan, a teacher-turned-astronaut who originally joined NASA in 1985 as the backup for Teacher in Space Christa McAuliffe. McAuliffe and six NASA astronauts were aboard the shuttle Challenger when in broke apart just after launch in January 1986.

A native of Waterbury, Connecticut, Mastracchio is a born engineer with a unique view of his role in NASA's astronaut corps.

"I kind of think of myself as the blue collar astronaut," Mastracchio, 47, said in an interview. "I'm not a scientist. I'm not a flight test pilot. I'm not a doctor. I'm just an engineer who got lucky and got selected as an astronaut, pretty much."

By 1993, he was a full-fledged flight controller in Mission Control before, after three separate interviews, being selected to join NASA's astronaut corps in 1996.

"To tell you the truth, I didn't even know you could be an astronaut when I was a kid," Mastracchio said in a NASA interview, adding that his first revelation came after college, when a magazine ad that encouraged readers to send away for an application. "So, I sent away for an astronaut application just to see what [it] looked like."

Mastracchio is making a return to the ISS with STS-118. He last flew to the high-flying laboratory in September 2000 as an STS-106 mission specialist aboard NASA's space shuttle Atlantis. Working alongside his six crewmates, Mastracchio helped outfit the then-empty space station with batteries, power converters, a treadmill and toilet to ready the ISS for its first human inhabitants during their 12-day mission.

For STS-118, Mastracchio serves as Mission Specialist 2 and the lead spacewalker for the mission's three planned extravehicular activities (EVAs). He will work alongside Williams for the first two, then step outside the ISS with the station's Expedition 15 flight engineer Clayton Anderson. A fourth spacewalk, led by Williams and also including Anderson, may be added to the mission if a new power transfer system performs properly, mission managers have said.

"On this mission, the most exciting things are going to be those I haven't done before, and that's the spacewalks," Mastracchio told reporters. "They will, of course, take up most of my time."

Williams, 53, is a medical doctor by training and veteran emergency physician with a taste for exploration that began at a young age.

He remembers following the flights of NASA's original Mercury flights as a six-year-old, but reaching space himself seemed beyond the reach of his Saskatoon home in the Saskatchewan, Canada. The ocean, on the other hand, appeared more attainable, especially after Canada's first aquanaut Joe McGinnis became his nation's first undersea research laboratory in habitant.

"And I thought, 'Wow! You know, if I can't be an astronaut, I want to be an aquanaut, and I want to be just like him," said Williams, who is married and has two children.

Since then, Williams has become both. He joined Canada's astronaut corps in 1992 and, six years later, spent 16 days in space aboard the shuttle Columbia during NASA's STS-90 Neurolab mission to study the effects of microgravity on the human brain and vestibular system.

Williams later commanded expeditions to Aquarius, an undersea laboratory off the coast of Florida that hosts NASA's Extreme Environment Operations missions to train astronauts for spaceflight and test telerobotic medicine techniques. He hopes that in 2019, the 50th anniversary of NASA's first Apollo landing, astronauts will once more return to the moon.

During STS-118, Williams said he will be especially proud to ride Endeavour's Canadian-built robotic arm, aptly named Canadarm, during his spacewalks as Mission Specialist 3.

"From a Canadian perspective, I get really excited being able to be in space," he said. "And this will be the first time I've had a chance to actually ride on the end of the Canadarm."

During Neurolab, he added, Williams spent the entirety of his space trek inside Columbia, so he is looking forward to gazing down at Earth through nothing more than his spacesuit helmet faceplate.

"I think EVA is going to be the best part of the spaceflight," Mastracchio agreed. "It's hard to believe that it won't be."