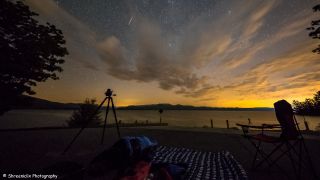 The best meteor shower this year is here: The Perseids peak this weekend, promising dazzling views for skywatchers in dark areas.

The Perseid meteor shower is always popular, but this year's peak — which occurs on the nights of Aug. 11 to 12 and Aug. 12 to 13 — will be particularly spectacular this year because the moon will be a thin crescent and set early, leaving a dark canvas for the meteors' bright streaks and fireballs.

According to NASA meteor expert Bill Cooke, the shower should feature 60 to 70 meteors per hour at its peak this year — fewer than years when the shower is in outburst, when there can be up to 200 meteors per hour. But nevertheless, the dark sky and balmy summer temperatures will make the Perseids a great meteor shower to watch. [Perseid Meteor Shower 2018: When, Where & How to See It]

"This is the meteor shower people view most because it occurs in the summer, when the nights are warm and comfortable, when you only have to worry about mosquitoes," Cooke told Space.com. "The moon is very favorable for the Perseids this year, and that'll make the Perseids probably the best shower of 2018 for people who want to go out and view it."

But if you're worried about light pollution or don't want to stay up late, you can also watch the Perseid meteor shower live online here at Space.com on Aug. 12 starting at 5 p.m. EDT (2100 GMT), courtesy of the online observatory Slooh.com.

The Perseid meteor shower comes around every summer when Earth passes through the trail of dust and debris left in the orbit of the very large Comet Swift-Tuttle, which passes near Earth every 133 years on its journey around the sun. The meteors blaze through the sky as pieces of debris burn up in the atmosphere, traveling at 37 miles per second (59 kilometers per second). Most Perseid meteors are made of pieces of dust about the size of a grain of sand, and almost all of them burn up completely on their way through the atmosphere. Sometimes, pieces glow particularly brightly; the Perseids are known for these so-called fireballss, Cooke said.

The Perseids appear to come from the constellation Perseus, known as the shower's radiant, but they can appear all across the sky. Viewers in the Southern Hemisphere will have to look toward the northeast horizon to be more likely to see the meteors.

Earth will pass through the thickest part of the comet's trail during the daytime hours on Aug. 12, which is why the nights before and after are the Perseids' peak. Although both nights should be spectacular, Cooke is inclined to say that the second night — Aug. 12 to 13 — might be better (although others might suggest the first night, he said). If you don't get a chance to see the meteor shower during its peak, try to catch a glimpse in the days before or after; you should still be able to see Perseid meteors, just in smaller numbers. Earth's full trek through the dusty trail lasts from July 17 to Aug. 24.

The Perseids are best seen after about 2 a.m. in your local time zone, when the constellation Perseus is high in the sky. Find somewhere dark where you can lean back and look at as much of the sky as possible. It's better to watch meteors with the naked eyes than with a telescope or binoculars, because a wider field of view lets you see more of the sky at once. Be sure to give your eyes at least 30 minutes to adjust to the darkness, and settle in for a long while. This year's rates are about one meteor per minute, which might come in the form of a faint streak or a bright fireball.