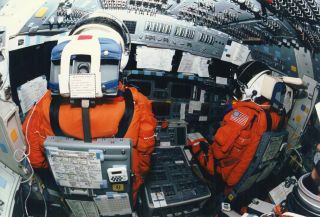 Switches on display inside the space shuttle during a demonstration test.
(Image: © NASA)

Five of those astronauts flew aboard the United States' last set of spacecraft to travel to the International Space Station (ISS), the space shuttles. But while the newly announced crews are excited to once again launch from Florida instead of Kazakhstan, they aren't very nostalgic for the hardware of the shuttles themselves.

During the press announcement of the new astronaut assignments, NASA Administrator Jim Bridenstine asked two veteran astronauts to compare their new rides to the shuttles they flew more than seven years ago. [NASA Announces First Astronaut Crews to Fly on Boeing and SpaceX Spaceships]

"With 40 years' difference in avionics and technology, we have squeezed a lot more into a smaller ship," said Chris Ferguson, who now works directly for Boeing on its Starliner program and who commanded the very last space shuttle flight, in 2011.

Ferguson, who retired from NASA at the end of 2011 to work on Starliner, also highlighted safety requirements that have shaped the design of the new vehicles. Those mandates include an ascent abort system meant to protect astronauts at any stage of the flight, which the space shuttle didn't have. "What we really see now is a much greater emphasis on safety," he said.

Bob Behnken, who was a mission specialist on two separate shuttle flights, expressed a deep respect for the old spacecraft. "That vehicle was really capable, and it's super hard to try to duplicate it in just the short period of time that we've had," he said. "It's hard to create a vehicle that accomplishes the mission that that vehicle did so wonderfully and so majestically."

But the shuttles weren't perfect, he confessed. "There are about 3,000 switches inside, and there was no situation that the astronauts couldn't make worse by touching the wrong switch at the wrong time," Behnken said. "We're grateful that the next vehicle that we're going to fly on is going to be a little bit more automated."

That vehicle, in Behnken's case, will be SpaceX's Crew Dragon, which he compared to the ultimate in smooth technology: Apple's handset. "It is absolutely like flying the iPhone," Behnken said.

Both of the new capsules come equipped with touch screens, and the astronauts' spacesuits include gloves that allow the spaceflyers to manipulate those screens smoothly. "It is also nice to not have all of the complications of switches and buttons, like we did in shuttle," Suni Williams, whose first mission was aboard the shuttle, wrote in a Reddit AMA. "The new flat screens will make it easier to interact [with] and control the spacecraft."

And it's not just about aesthetics — the astronauts will also be able to get more done during their limited time in space. "With today's technologies, automation in the spacecraft will help us do our tasks easier and allow us to have more capability," Williams wrote.