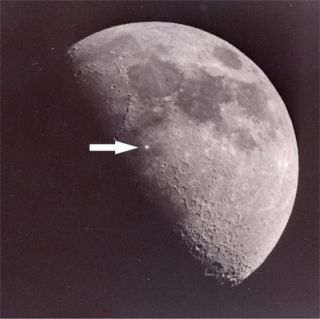 Image of "transient lunar phenomenon" (TLP) taken in 1953. The TLP is the small, bright spot in the center of the image indicated by the arrow, and may have been caused by gassy material leaking out of the moon.
(Image: © Leon Stuart/Columbia University Department of Astronomy)

Changes in the brightness and color over small areas of the moon?ssurface, known as Transient Lunar Phenomena, or TLP, have been observedtelescopically for hundreds of years.

The optical flashes have been seen by skywatchers but rarelyphotographed.

Using data from decades-old observations, Crotts and colleagueshave now found a strong correlation between TLP sightings and regions wherelunar orbiting spacecraft have detected gas leaking out from beneath the lunarsurface.

?The areas selected consistently by TLP are the cratersAristarchus (in about 50 percent of sampled reports), Plato (about 15 percent)with Kepler, Copernicus, Tycho and Grimaldi all at the few percent levelapiece,? Crotts said.

"This data ties in with observations made by the Apollo 15 and Lunar Prospector spacecraft which detected the gas radon-222 twice at Aristarchus and also once at Kepler and Grimaldi.

Now Crotts and collaborators hope to achieve a larger sample ofTLP sightings by using a robotic camera to keep watch on the moon in an effort tophotograph any TLP events that may occur.

The camera, located at the Cerro Tololo Inter-American Observatoryin northern Chile, will remove the gruesome task of continuously observing fromthe astronomer and provide observations free from the bias and inaccuracy thathuman eyes can introduce.

?It [the camera] will be more sensitive than the humaneye/telescope combination, and more objective and persistent," Crottssaid. "Hopefully it will give a better map of the TLP geographicaldistribution, as well as their timing and internal structure."

It is likely that the ghostly and fleeting TLP could be amanifestation of inert gases such as radon and argon being released from withinthe moon due to radioactive decay of uranium-238 and potassium K-40.

Moonquakes would seem a likely candidate for triggering therelease of these gases but no correlation between TLP and moonquakes was foundby Crotts.

?There is some small tendency for TLP to correlate with perigee(the moon?s closest point to the Earth in its orbit). Maybe there is asignificant delay between moonquakesand resulting TLP. We don't know,? Crotts told SPACE.com.

The findings have been submitted to the journal Icarus.

Whatever mechanism initiates their release, Crotts suspects thatthe inert gases will be mixed with others of a more volcanic nature. "Thisis just speculation, but the prime volcanic suspects would be carbon monoxide(CO), carbon dioxide (CO2) and water (H2O),? Crotts said.

If lunar outgassing is a source of CO, CO2 or H2O, this couldprove useful to future lunarcolonies, supplying drinking water and fuel for example and saving billionsof dollars in transportation costs. Hauling freight from Earth now costs about$10,000 per pound just to get from the launch pad to space.

Confirmation of the identities of the gases present could comecourtesy of the Japanese lunar orbiter SELENE, due for launch later this year.

?SELENE will carry a better Radon-222 alpha particle detector thanany ever before. We should be observing simultaneous to SELENE, so cancorrelate TLP and outgassing even more effectively,? Crotts said.

Future high resolution images from NASA?s Lunar ReconnaissanceOrbiter and other planned lunar spacecraft will also be studied in the hope ofdetecting any permanent changes to the lunar surface accompanying TLP detectedby the automated camera in Chile.