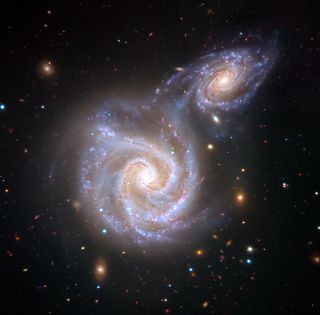 An artistic visualization of the collision between the Milky Way galaxy and the Sausage galaxy, which likely happened between 8 billion and 10 billion years ago.
(Image: © V. Belokurov (Cambridge, U.K.; and CCA, New York, U.S.) based on the image by ESO/Juan Carlos Muñoz)

A sausage-shaped galaxy smashed into our own Milky Way billions of years ago, changing our galaxy's shape forever.

Using data from the European Space Agency's Gaia satellite, an international team of astronomers has discovered that an ancient, intergalactic collision took place between the Milky Way and a dwarf galaxy scientists dubbed the "Gaia Sausage" about 8 billion to 10 billion years ago. The researchers think that this epic crash could have helped shape the Milky Way's central bulge and outer halo of stars, according to a statement.

"The collision ripped the dwarf to shreds," said Vasily Belokurov, a contributor to the discovery, who is the lead author on the Sausage discovery papers and a researcher at the University of Cambridge in the U.K. and the Center for Computational Astrophysics at the Flatiron Institute in New York City. However, after the collision, the stars left behind from the Sausage galaxy moved in radial orbits in long, narrow patterns, according to the statement. The Sausage galaxy gets its name from this sausage-shaped, radial orbit. [When Galaxies Collide: Amazing Photos of Cosmic Crashes]

The sausage-shaped path that these stars orbit in is what tipped the researchers off about this collision, because this path is near the center of our galaxy. "This is a telltale sign that the dwarf galaxy came in on a really eccentric orbit and its fate was sealed," Belokurov said in the statement.

The researchers think this newly discovered collision could have had lasting effects on our galaxy. Belokurov told Space.com that the impact "must have completely reshaped the Milky Way."

Belokurov and the other researchers are still exploring the consequences of this collision, and none of these have been confirmed. But the researchers think the collision could have had three main effects.

First, the Milky Way's disk was likely puffed up or even potentially "completely destroyed," forcing it to regrow, according to Belokurov. Second, debris from the collision could have created the "bulge" at the Milky Way's center. Third, this collision and the scattering of stars and debris could have also created a "stellar halo" around our galaxy.

While the Sausage galaxy collision is by no means the only instance of another galaxy hitting the Milky Way, it is the largest dwarf satellite galaxy known to have collided with our own, the researchers said. However, because the Sausage galaxy is so large, it caused more damage than usual, they added. Additionally, the more radial a galaxy is, the more damage it might do in a collision, Belokurov said in an interview. [How the Gaia Galaxy-Mapping Satellite Works (Infographic)]

Now that the researchers know about the collision, they plan to further study its effects and even "study the chemistry of the stars that came in with the Sausage [galaxy]," according to Belokurov.

The discovery is detailed in papers published in the journal Monthly Notices of the Royal Astronomical Society, The Astrophysical Journal Letters and the preprint site arXiv.org.