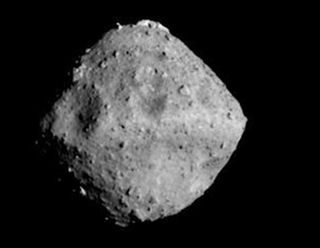 Japan's Hayabusa2 spacecraft is closing in on its asteroid target ahead of a planned rendezvous just a few days from now.

"From a distance, Ryugu initially appeared round, then gradually turned into a square before becoming a beautiful shape similar to fluorite (known as the 'firefly stone' in Japanese)," Hayabusa2 project manager Yuichi Tsuda wrote today (June 25) in a description of the newest photos, which the probe took Saturday and Sunday (June 23 and 24), from as close as 25 miles (40 kilometers). [Photos: Japan's Hayabusa2 Asteroid Mission in Pictures]

"Now, craters are visible, rocks are visible and the geographical features are seen to vary from place to place," Tsuda added. "This form of Ryugu is scientifically surprising and also poses a few engineering challenges."

Several earlier images, taken from 62 miles to 124 miles (100 to 200 km) away, reveal topography suggesting that the 3,000-foot-wide (900 meters) asteroid has probably had a complex evolutionary history, JAXA officials said. Scientists say asteroids in Ryugu's size range might be fragments of a larger parent body.

"As we approached Ryugu and were able to distinguish individual features in the asteroid's topology, it became clear that Ryugu has a land of rich terrain," mission principal investigator Seiji Sugita said in a different statement published Friday (June 21). "Numerous clusters of rock roll on the surface. Among these, a large rocky mass (about 150 meters [490 feet] across) stands out on the upper part of Ryugu due to its brighter color (higher reflectivity). The belt-shaped ring of peaks that surround the equator are also slightly brighter than their surroundings.

"This color difference," Sugita added, "may reflect a difference in material composition and the size of the particles that form the rock. We can also see many sunken regions that look like craters. These depressions may have been made in collisions with other celestial bodies. A structure that looks like a grove is also visible."

JAXA has released a number of Hayabusa2's Ryugu photos in recent days. For example, another set showed that the asteroid rotates perpendicular to its orbit every 7.5 hours. Ryugu also appears to be similar in shape to asteroid Bennu, the target of NASA's OSIRIS-REx asteroid-sampling mission, and asteroid 2008 EV5, the target of the proposed European MarcoPolo-R mission that ultimately was not selected for launch.

Hayabusa2 left Earth in 2014 and is scheduled to arrive at Ryugu — which is about 180 million miles (290 million km) from Earth at the moment — Wednesday (June 27) or thereabouts.

Other touchdown operations are planned in February 2019 and in April or May 2019. Additionally, Hayabusa2 will generate a crater with an impactor in March or April 2019, and do a second rover deployment in July. (Eventually, the mothership will deploy a total of three rovers and a lander onto Ryugu's surface.)

Hayabusa2 will also spiral down to collect samples from the fresh crater. If all goes according to plan, these samples will come down to Earth in a special return capsule near the end of 2020.

Such operations will be complicated somewhat by Ryugu's distinctive shape, as Tsuda mentioned in his reference to "engineering challenges."

That shape "means we expect the direction of the gravitational force on the wide areas of the asteroid surface to not point directly down," Tsuda said. "We therefore need a detailed investigation of these properties to formulate our future operation plans."

Hayabusa2 is following in the footsteps of the original Hayabusa mission, which made history in 2010 when it returned small pieces of the asteroid Itokawa to Earth.