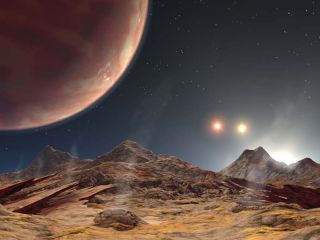 An artist's illustration of exoplanet in a triple-star system.
(Image: © NASA/JPL-Caltech)

Luke Skywalker's backstory may not be so fanciful after all.

Some alien planets in multiple-star systems — such as the two-sun Tatooine, Luke's home world in the "Star Wars" universe — may indeed nestle in orbits that are stable for long stretches of time, a new study suggests.

In the study, researchers ran more than 45,000 computer simulations, examining where planets of various masses and dimensions could exist in two- and three-star systems. Planets have been discovered in such systems, but just how long they can remain in their orbits before gravitational interactions send them crashing into one of their host stars, or careening out into interstellar space, remains a topic of considerable debate. [The Strangest Alien Planets (Gallery)]

Now, the stable-orbits proponents have some more evidence to cite.

"We ran the simulations for periods ranging from 1 million to 10 million years, in order to see if the systems are stable over very long periods," study lead author Franco Busetti, of the School of Computer Science and Applied Mathematics at the University of the Witwatersrand in South Africa, said in a statement.

"The analysis shows that most configurations had large enough stable regions for planets to exist," added Busetti, who presented the results Monday (June 4) at the 232nd meeting of the American Astronomical Society in Denver. "Many of these areas are actually very habitable for planets."

Fewer than 40 three-star planets are known. But the new study, which has been submitted to the journal Astronomy & Astrophysics, could help astronomers find more, Busetti said.

"It could assist in selecting suitable candidates for a survey of such systems and guide the observational searches for them," he said. "The geometry of the stable zone indicates not only where to look for planets but how to look."