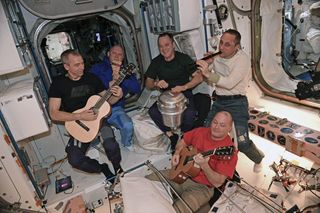 An out-of-this world jam band is orbiting 250 miles (400 kilometers) above the Earth at the International Space Station right now.

The station's Expedition 55 crew gathered up some musical instruments from around the orbiting lab to throw a "zero-g" jam session on April 27, dubbing their new group "AstroHawaii."

NASA astronauts Drew Feustel, Scott Tingle and Ricky Arnold and Russian cosmonauts Oleg Artemyev and Anton Shkaplerov brought together the musical stylings of Texas with Hawaiian drum and some Peruvian pipes for a unique concert for the universe. [Space Station Photos: Expedition 55 Crew in Orbit]

Feustel and Tingle rocked guitars, while Arnold accompanied them on the Hawaiian drum. Artemyev and Shkaplerov joined in with Peruvian pipes, instruments that the cosmonauts learned to play in just 20 minutes of practice, Artemyev tweeted.

Calls for an album or even simply a video of the concert filled the Twitter-verse. The crew clearly enjoyed themselves in the impromptu concert.

"We think this may be the first 'guitar jam' in space with amplifiers and effects!" Feustel tweeted. "It was quite a rock 'n' roll show."

And, don't worry: We'll keep an eye, and an ear, out for more cosmic concerts.