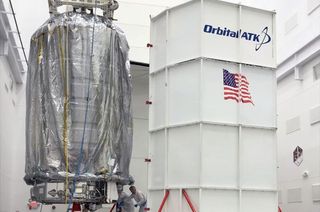 Orbital ATK's next space station-bound Cygnus spacecraft, named the "S.S. J.R. Thompson" is seen being loaded into a container to be transported for its pre-launch fueling at NASA's Wallops Flight Facility in Virginia.
(Image: © Orbital ATK)

An aerospace executive and NASA director who helped lead the development of rocket engines for the Saturn V and space shuttle is being memorialized with the naming of a commercial cargo spacecraft.

James Robert "J.R." Thompson, Jr., who died at the age of 81 on Nov. 7, 2017, is the namesake for Orbital ATK's next Cygnus spacecraft set to launch to the International Space Station. The "S.S. J.R. Thompson" will lift off on the OA-9 mission atop an Orbital ATK Antares booster from NASA's Wallops Flight Facility in Virginia under a resupply services contract with the space agency.

The launch of the S.S. J.R. Thompson, packed with 7,385 pounds (3,350 kilograms) of crew supplies, equipment and scientific experiments for the space station, is targeted for Sunday, May 20. [Space Calendar 2018 - Rocket Launches & Night Sky Events]

"I am proud to announce we will name this spacecraft after J. R. Thompson, a distinguished leader in the aerospace industry and an indispensable leader of our Orbital ATK leadership team for over 20 years," said Dave Thompson, president and CEO of the Dulles, Virginia-based company, in a video statement released on Tuesday (May 8). "Since our first cargo mission nearly 5 years ago, it has been our tradition to name the Cygnus spacecraft in honor of people who have advanced our country's human space program."

"J.R. was instrumental in the development of our Antares rocket, as well as several other [of the company's] vehicles and spacecraft," said Thompson, who is of no relation.

J.R. Thompson served as vice chair and senior executive advisor of Orbital ATK's predecessor Orbital Sciences after being the company's president and chief operating officer from 1999 to 2011. Prior to that, he was the executive vice president and general manager of launch systems and the corporation's chief technical officer.

"J.R.'s exceptional engineering expertise and his inspiring leadership motivated all those around him — including me," said Thompson.

Before joining Orbital, J.R. Thompson worked for 20 years at NASA, including being the space agency's tenth deputy administrator from 1989 to 1991 and the fifth director of the Marshall Space Flight Center in Huntsville, Alabama, from 1986 to 1989.

Thompson first came to Marshall in 1963, after working for Pratt and Whitney Aircraft as a development engineer. As a new member of the NASA team, Thompson served as a liquid propulsion system engineer designing and analyzing components for the J-2 rocket engine used on the second and third stages of the Saturn V, which flew astronauts to the moon 50 years ago.

Thompson continued his work on other Saturn rocket and interplanetary propulsion systems through 1974, when he was named manager of the Main Engine Projects Office to lead the development and operation of the most advanced liquid propulsion rocket engine ever built, the space shuttle main engine, or RS-25, which has since been modified for use with NASA's Space Launch System rocket.

In 1986, prior to becoming director at Marshall, Thompson served as the vice chairman of NASA's investigation board into the loss of the space shuttle Challenger. In that role, Thompson led the collection and analysis of data related to the accident in support of the presidential commission on the STS-51L tragedy.

The recipient of the NASA Medal for Exceptional Service and the Robert H. Goddard Memorial Trophy, Thompson is the first person to have a Cygnus named for him who has not flown in space.

The most recent Cygnus to resupply the space station, the S.S. Gene Cernan, was named for the commander of the Apollo 17 mission and "last man on the moon," who died in January 2017. The spacecraft launched Nov. 12, 2017 and was at the space station for 21 days. It departed on Dec. 6, 12 days before being intentionally destroyed re-entering Earth's atmosphere.