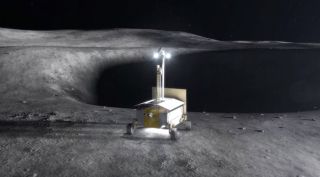 WASHINGTON — NASA says it decided to cancel a lunar rover mission last month despite a renewed focus on lunar exploration because that one-time effort did not fit into a plan that emphasizes a much higher cadence of missions, initially flown commercially.

In a May 3 statement, NASA said it decided to cancel Resource Prospector, a mission still in its early phases of development to study water ice and other volatiles at the lunar poles, because it was not suited to its Exploration Campaign, NASA's concept for a series of missions that will initially use small, commercially developed landers, followed by larger landers.

"This project was intended as a one-time effort to explore a specific location on the moon, and as designed, now is too limited in scope for the agency's expanded lunar exploration focus," the agency said of Resource Prospector in a statement. "NASA's return to the Moon will include many missions to locate, extract and process elements across bigger areas of the lunar surface." [21 Most Marvelous Moon Missions of All Time]

NASA confirmed April 27 that it was cancelling Resource Prospector, a day after an open letter to new NASA Administrator Jim Bridenstine by lunar scientists questioning the reported cancellation. The agency said at the time, and confirmed in the new statement, that selected instruments from Resource Prospector will fly on commercial landers.

The April 27 announcement also coincided with the release of a draft request for proposals for its Commercial Lunar Payload Services (CLPS) program, where the agency will acquire accommodations on commercial landers under development for payloads like Resource Prospector instruments.

"We'll leverage commercial capabilities for these small payload deliveries, and CLPS missions will play an important role in our expanding and sustainable lunar exploration strategy," Bridenstine said in the May 3 statement. He is scheduled to speak at a May 8 industry day at NASA Headquarters about the CLPS program.

Other NASA executives offered similar views. "Resource Prospector was formulated in a totally different environment, including under a totally different policy," said Steve Jurczyk, NASA acting associate administrator, at a May 1 meeting of the National Academies' Space Studies Board here. "It was a very focused mission with a fairly short duration."

Jurczyk said that a shift of lunar missions to the agency's Science Mission Directorate (SMD) has created a desire to do more missions than a one-off concept like Resource Prospector, even though early missions are unlikely to be as sophisticated as that rover mission planned to be. Those new missions, he said, will be coordinated with NASA's space exploration and technology directorates.

"What are the set of missions that we really want to do to locate and then characterize, to see if we can exploit, resources, particularly water, on the surface of the moon?" he said. "We're transitioning what we would do on Resource Prospector to a set of missions, starting with a set of instruments that were going to be on Resource Prospector. We're going to evaluate those and one or more of those will probably go on these landers."

Assuming that review confirms the cancellation decision, NASA plans to move ahead quickly with a regular series of commercial lander missions. Jurczyk said that Thomas Zurbuchen, NASA's associate administrator for science, wants to start flying two missions a year starting in 2019 and going through at least 2022.

"He wants to have two 'shots on goal' every year starting in 2019," Jurczyk said of Zurbuchen. "We want to challenge industry to develop the first landers to deliver some amount of kilograms of science instruments and exploration instruments to the surface of the moon in '19, in '20, in '21, in '22."

That pace, he said, offered redundancy should some missions fail. "If we send two and one doesn't make it or crash lands, that's okay," he said. "We'll learn from it, and then we'll go fly again."

Zurbuchen, speaking at the Space Studies Board meeting May 2, confirmed that NASA didn't expect every commercial lander mission to be successful. "Our hope is to take one or two shots on goal every year," he said. "A reasonable expectation is a 50 percent success rate at the beginning. It's not zero, and it's not 100."

That expectation, as well as the limited payload accommodations on initial commercial landers — tens, rather than hundreds, of kilograms, he said — will put restrictions on the types of payloads NASA will fly on those landers. "The instrumentation needs to be appropriate for the tool that we're using," he said. "We're not going to invest $100 million in an instrument, even if it fits into 10 kilograms. Not at the beginning."

"We're not going to be discouraged if the first one doesn't work," he added.