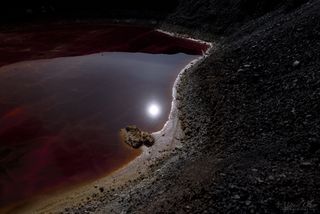 A full moon is reflected in a puddle of acid water at Achada do Gamo, part of the Dark Sky Alqueva reserve in Mértola, Portugal.
(Image: © Miguel Claro)

Miguel Claro is a professional photographer, author and science communicator based in Lisbon, Portugal, who creates spectacular images of the night sky. As a European Southern Observatory photo ambassador, a member of The World At Night and the official astrophotographer of the Dark Sky Alqueva Reserve, he specializes in astronomical skyscapes that connect Earth and the night sky. Join Miguel here as he takes us through his photograph "A Lunar Landscape Shows a Full Moon Reflected in the Acid Water of Mina de São Domingos."

Moonlight is reflected off a red puddle of acid water in this photo taken at an old Portuguese mine.

This photo, which features an unusual view of the full moon, looks like it could have been an image of a Martian landscape, taken back when the Red Planet was covered in water. However, this close-up shot was captured on Earth at the São Domingos mine in Achada do Gamo, one of the regions inside the Dark Sky Alqueva Reserve in Mértola, Portugal.

Of course, even if the image were taken from Mars, the puddle of water could not really contain a reflection of the light of our moon or even of Earth — they're actually both too far away to be seen in such a shot. Such a bright, round reflection in a puddle of water on Mars could only be possible if it came from a bright source like our sun. In any case, Mars' two moons, Phobos and Deimos, aren't round like Earth's moon; they appear as potato-shaped lumps in the Martian sky. [Photos of Mars: The Amazing Red Planet]

The abandoned São Domingos mine is located in the Iberian Pyrite Belt and was once a major source of basic metals and other elements such as sulfur. Iron and other chemicals in the mine leach into rainwater, creating pools of acid water that have an ocher, or reddish, color.

Mining at São Domingos dates back to the ancient Romans. During the modern mining period, between the 1850s and 1960s, more than 20 million tons of materials were removed from the mine, according to the Serrão Martins Foundation (in Portuguese), a nonprofit institution that protects the mine. This produced about 14.7 million tons of waste that accumulated in heaps of up to 46 feet (14 meters) high, containing a dozen different materials such as pyrite, gossan, slag, ash, iron oxides, barren rock, sludge and other debris.

It's important to remember that from the tiniest bacterium to the largest tree, all life as we know it requires water. And we do know that NASA's Opportunity rover previously discovered that the plains of Meridiani were once a water-soaked place. When Opportunity discovered the mineral jarosite — an iron- and sulfur-bearing mineral that only forms in the presence of acid water — scientists were thrilled! This mineral provides clues about what the Martian environment was like when water was present on the planet.

Acidic water is harsh, but we know that microbes on Earth can thrive in it. On Earth, microbial communities thrive in highly acidic waters rich in iron and sulfur, such as the blood-red waters of the Río Tinto, a river in southwestern Spain. Among the minerals dissolved in the waters of the Río Tinto is jarosite, the same mineral that provided researchers with a tantalizing clue about Mars' watery past. Whether life ever existed on Mars has yet to be determined.