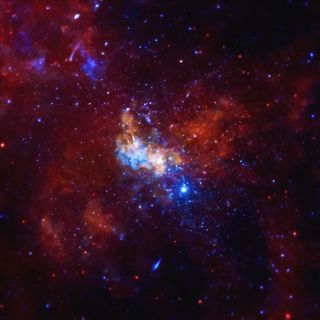 The location of the black hole at the center of the Milky Way, Sagittarius A.
(Image: © F. Baganoff et al./NASA/CXC/MIT)

Black holes in the centers of galaxies could accelerate mergers between objects and produce more ripples in space-time, also known as gravitational waves, a new study suggests.

Gravitational waves are distortions in space-time produced by encounters between massive objects, such as black holes or ultradense neutron stars. The first-ever detection of gravitational waves occurred in 2015, accomplished by scientists using the Advanced LIGO (Laser Interferometer Gravitational Wave Observatory). This happened when two large black holes (29 and 36 times the mass of the sun) merged into one, creating space-time ripples.

Since then, there have been several detections of other sets of gravitational waves.

"These observations show that BH [black hole] mergers are commonplace in the universe," researchers said in a statement from the Royal Astronomical Society. "However, we are still not sure how these sort[s] of binary systems form. This is because they need to be on very close or very eccentric orbits in order to collapse in such a way that GWs [gravitational waves] are observable."

The new study suggests that systems of two dense objects like black holes can merge faster inside the typical heart of a galaxy, where a supermassive black hole resides. The research was led by Ph.D. student Joseph Fernandez, an astrophysics researcher at Liverpool John Moores University in England.

Often, a pair of objects passing by a black hole will be separated if they get too close to the object, because the black hole's gravitational field will tear them apart. Sometimes, however, the binary will survive the encounter — but the objects' orbits will be severely modified, the researchers said.

Fernandez's team ran several simulations and concluded that surviving binary systems would have tighter and more-eccentric orbits between the two objects after passing by black holes. This would make their situation ripe for a merger, because they would be much closer to each other than before, the researchers found.

"This could be sufficient to force binaries that wouldn't merge within the lifetime of the universe to do so sooner, leading to observable gravitational waves," researchers said in the statement.

Fernandez presented his research April 3 at the European Week of Astronomy and Space Science in Liverpool.