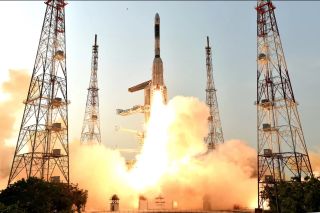 The Indian Space Research Organisation successfully launched the GSAT-6A communications satellite on March 29, 2018, on a Geosynchronous Satellite Launch Vehicle rocket, but lost contact with the satellite on March 30.
(Image: © ISRO)

India lost contact with a communications satellite only days after the country launched the craft into space, according to multiple media reports and the Indian Space Research Organisation (ISRO). Recovery efforts are ongoing as India faces its second possible mission failure in less than a year.

GSAT-6A initially launched as planned on a Geosynchronous Satellite Launch Vehicle rocket Thursday (March 29) from Satish Dhawan Space Centre in Sriharikota, near the Bay of Bengal on India's southeast coast. At first, the satellite behaved normally, but then ISRO lost contact with GSAT-6A at an undisclosed time on March 31 (Indian time). Communications ceased after the satellite finished the second of three planned engine-firings meant to raise its orbital altitude around Earth. [See more photos of India's GSAT-6A satellite launch]

The engine at first fired as planned for 53 minutes, ISRO said on its website yesterday (April 1). But then, GSAT-6A went silent. "When the satellite was on course to normal operating configuration for the third and the final firing, scheduled for April 1, 2018, communication from the satellite was lost," ISRO officials said in a statement.

ISRO is trying to re-establish the link. "The Mission Control is on the job continuously," said ISRO chair Kailasavadivoo Sivan, who only recently assumed that position, in another report from the Times. He added that data ISRO received shows it is possible to recover the satellite, but he did not offer specifics.

GSAT-6A was supposed to last 10 years and provide mobile communications in both S-band (microwave) and C-band (radio) frequencies, according to the Times. The satellite was also meant to improve communications for armed forces working in remote areas; in zones with little cellphone service, the military could receive satellite data using handheld ground terminals that would connect to this satellite.

The August incident was the first PSLV failure since September 1997, when the fourth stage of a PSLV put the IRS-1D remote sensing satellite into a lower orbit than planned.