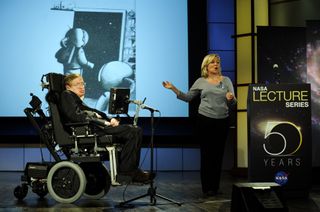 Stephen Hawking discussed why we should go to space on April 21, 2008, at George Washington University in Washington as part of a lecture series for NASA's 50th anniversary.
(Image: © Paul E. Alers/ NASA)

The death of renowned physicist Stephen Hawking, reported today (March 14), prompted accolades from across NASA, including from its acting administrator and many astronauts.

Robert Lightfoot, NASA's acting administrator, spoke about Hawking's career in a statement on the NASA website.

"Today, the world lost a giant among men, whose impact cannot be overstated. Our condolences go out to the family and friends of Stephen Hawking. Stephen's breakthroughs in the fields of physics and astronomy not only changed how we view the cosmos, but also has played, and will continue to play, a pivotal role in shaping NASA's efforts to explore our solar system and beyond. [Scientists and the Public Remember Stephen Hawking]

"Along with groundbreaking and inspiring work came another attribute that made Stephen a hero not just to younger generations, but also to his peers," he continued. "A longtime friend to NASA, Stephen was a passionate communicator who wanted to share the excitement of discovery with all. His loss is felt around the world by all he inspired with his work and his personal story of perseverance."

Astronaut Karen Nyberg, who was on the International Space Station for six months in 2013 as part of Expedition 36/37, tweeted a picture of Earth along with a quote from Hawking. "It is such a simple image with a compelling message. One planet. One human race," the quote from Hawking read. Nyberg added, "RIP Stephen Hawking. May you continue to inspire through curiosity, knowledge, and wisdom."

"A true visionary has passed...his wisdom is a gift for our future," added astronaut Drew Feustel on Twitter. Feustel, a veteran of two spaceflights (STS-125, STS-134), is expected to launch to the International Space Station as part of Expedition 55/56 on March 21; he will command Expedition 56.

"So sad to hear of the passing of #StephenHawkingRIP," tweeted former space shuttle astronaut Mike Massimino, who participated in the shuttle missions STS-109 and STS-125; the latter was the last mission to repair the Hubble Space Telescope. "He truly changed the way we see the universe," Massimino said.

"Stephen Hawking told us about the universe; Craig Mack told the universe about us. Both are missed," tweeted astronaut Victor Glover; Mack was a rap icon who passed away yesterday at age 46.

Other former NASA astronauts also chimed in (this list doesn't include the astronauts who retweeted quotes from other sources):

The loss of Hawking also inspired tributes from international astronauts who have worked regularly with NASA.

"He inspired generations to look beyond our own blue planet and expand our understanding of the universe. His personality and genius will be sorely missed. My thoughts are with his family," wrote British astronaut Tim Peake, who flew to the ISS in 2015-16 (Expeditions 46/47).

Italian astronaut Luca Parmitano began his tweet with a Hawking quote: "It would not be much of a universe if it wasn't home to the people you love." Added Parmitano, "That's a wonderful 'theory of everything' in its own merit. RIP Professor Hawking." Parmitano flew to the ISS in 2013 (Expeditions 36/37) and is expected to return in 2019.

"Sad to hear another childhood hero of mine has moved on," tweeted German astronaut Alexander Gerst, a veteran of one ISS flight (Expeditions 40/41) who will return for Expedition 56, and command Expedition 57. "Thanks for inspiring me along with millions of youngsters and students, showing us that physics & sciences are the opposite of boring! You will continue to be aboard with us, on all those future space exploration missions!"

Canadian astronaut David Saint-Jacques, who will fly to the International Space Station in November as part of Expedition 58/59, tweeted a short tribute. "RIP, Prof Hawking. Had the chance to meet him while a student at @Cambridge Uni [University of Cambridge in the UK]. A friendly, life-loving genius, whose intellectual legacy is huge."

"Genius is so fine and rare," tweeted fellow Canadian astronaut and space station commander Chris Hadfield, who flew to space during STS-74, STS-100 and Expeditions 34/35. "Goodbye Professor Hawking. You inspired and taught us all."