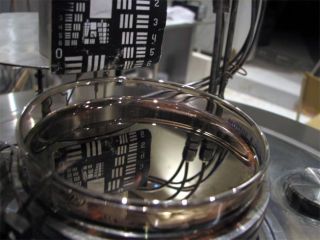 A 2-inch diameter flat liquid mirror. It is made of an ionic liquid coated with a thin layer of silver. The reflection of a resolution chart is visible in the liquid.
(Image: © Omar Seddiki (U. Laval))

Scientists have successfully coated a liquid surface with a thin layer of silver metal, creating a highly reflective mirror that could be used to create mammoth liquid-mirror telescopes on the moon.

Such a lunar observatory could be as wide as football a field, letting scientists peer back to a time when the first stars in the universe were born.

Researchers led by Ermanno Borra of Laval University in Quebec, Canada, applied the silver film layer to the surface of an ionic liquid, a fluid that consists only of charged particles called “ions.” Table salt, if heated above 1,472 degrees Fahrenheit (800 degrees Celsius), melts and transforms into an ionic liquid.

The researchers used a commercially available ionic liquid called ECOENG 212, which has a viscosity between that of water and honey. They applied electric current to silver strands suspended in the ionic liquid while in a vacuum environment. The silver evaporated and “that coats the liquid with a thin reflective layer of metal,” Borra said. “It’s basically the same technique used to coat a glass mirror with aluminum or gold.”

The technique is detailed in the June 20 issue of the journal Nature.

The new silvered liquid remained stable for months, did not evaporate in a vacuum, and its reflectivity rivaled that of the best metal-coated mirrors.

All of these properties, the scientists say, make metallized ionic liquids ideal for use as the lens in a proposed lunar liquid mirror telescope, or LMT, a project currently under consideration by NASA.

Borra and Roger Angel, an astronomer at the University of Arizona who was also a co-author on the study, are major proponents of a lunar LMT, which they say could detect objects up to 1,000 times fainter than even the James Webb Space Telescope, a next-generation orbiting observatory set for launch in 2013. A lunar LMT would be powerful enough for scientists to spot ultraviolet radiation from the very first stars thought to illuminate the universe, they say.

LMTs are much cheaper than glass-mirror telescopes. The 6-meter Large Zenith LMT at the University of British Columbia, which has a liquid mercury metal lens, cost $1 million to build. A comparable glass mirror telescope would cost an estimated $100 million.

A lunar LMT would be much easier to transport to the moon and to assemble once there, its proponents say. The moon's advantage over Earth as an observing platform? No atmosphere to distort the incoming light.

“The mirror is liquid, so you can carry it in a jug on a rocket and take it to the moon,” Borra told SPACE.com. “Then you pour it into a dish…if there is a dimple somewhere in the container, the liquid simply flows to fill it up.”

Whereas a glass mirror has to be tediously ground to the right lens shape, a LMT simply has to be rotated because a spinning fluid forms a bowl-shaped parabaloid perfect for collecting light.

Current LMTs use liquid mercury or gallium for their mirrors. But this approach won’t work on the moon because the sub-zero temperatures there would freeze the liquid metals into useless solid lumps. In contrast, a spinning metal-coated ionic liquid could remain fluid and retain its parabola shape, Borra said.

Liquid metal lenses would also be too “hot” for the kinds of observations scientists hope to do on the moon. “It’s like an incandescent bulb,” Borra explained. “You have a wire running through and because it’s very, very hot, it emits visible light.”

An ideal lunar LMT would have to emit very little radiation of its own. “To have that glow dim enough to observe these very, very faint objects, you need a very, very cold mirror,” Borra said.

Borra is not worried, though, because there are trillions of possible ionic fluids scientists could experiment with. “It’s a huge advantage because we can fine-tune the characteristics of the liquid we use on the moon,” he said. “It’s a monstrous advantage.”