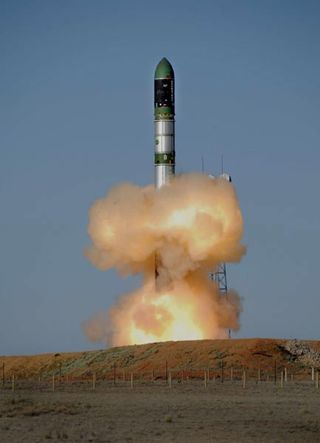 Called TerraSAR-X, thecraft will spend the next five years circling the planet at an altitude ofabout 319 miles to gather vast volumes of data using a cutting edge X-bandradar system.

The nearly 3,000-pound satellitewas launchedFriday from the Baikonur Cosmodrome in Kazakhstan. The three-stage Dneprrocket flew out of its underground missile silo at 10:14 p.m. EDT Thursday (0214GMT) and successfully guided the spacecraft into a Sun-synchronous orbit,according to project officials.

TerraSAR-X contacted aground station in Kenya about 30 minutes after liftoff, confirming the craftwas in good health following the ride to space.

The mission's launch waspostponed several months after an earlier flight of the Dnepr rocket suffered amajor failure last year. The Dnepr, a converted ballistic missile from formerSoviet military arsenals, was grounded for about nine months while engineerswrestled with technical problems.

The Dnepr returned toflight in April, when it launched a group of small satellites for internationalcustomers.

TerraSAR-X will undergo atesting phase through this fall, during which ground controllers will validatethe health of the satellite's radar system. Officials expect to enter theoperational phase of the nearly $250 million mission by the end of the year.

The mission's cost is splitbetween the public and private sectors, including satellite-builder EADSAstrium, the imagery sales company Infoterra, and DLR, the German space agency.

TerraSAR-X's radar will becapable of imaging up to one million square kilometers, or almost 400,000square miles, of Earth's surface per day, according to a written statement fromthe mission partners.

The X-band syntheticaperture radar system works by sending radar beams toward Earth and collectingthe returns of the pulses after bouncing off the surface. This method willyield precise maps of the entire planet with resolutions as high as one meter,or about three feet.

The radar can also steerits radio pulses without maneuvering the spacecraft, which will allowscientists to gather data using three techniques. The methods include imagingthe Earth's surface in a fixed strip mode, scanning across the satellite'sground track, and continuously training radar beams on a specific area as thecraft flies overhead.

"This is decisive,especially in regions near the Equator which are often clouded," said WolfgangPitz, TerraSAR-X project manager at EADS Astrium.

TerraSAR-X can trace itsheritage to previous X-band radar systems that flew on three space shuttlemissions in 1994 and 2000. Germany participated on all three missions.

"X-band technology hasalways been a German specialty," Pitz said last year. "In this field,we are at the leading edge worldwide."

TerraSAR-X aims to improvecurrent topographic imagery by a factor of ten, according to project officials.Topographic mapping is a major application for mission data.

The data will be evenlysplit between scientific and commercial applications. DLR, the German spaceagency, is responsible for utilizing science data, while Infoterra will placeimagery on the commercial market.

Scientists and customerswill use the information to help monitor vegetation and crops across the globe,and special emphasis will be placed on keeping tabs on environmental changes.Polar sea ice, coastal regions and areas with seismic activity will also bepotential targets for the satellite. In addition, TerraSAR-X data will be usedto track urban development and its impact on the environment.

Governments can also useradar imagery to aid in disaster response and military reconnaissance.

"In the first year ofoperation, we will gain a lot of experience and encounter applications we donot even consider at the moment," said Jorg Herrmann, chief executiveofficer of Infoterra.

A follow-on satellite ?TerraSAR-X2 ? is already in development. The craft would be financed by Infoterraprofits from TerraSAR-X imagery if the project is commercially successful. Itslaunch could occur in 2011.

TanDEM-X, which consists ofa complementary satellite flying in formation with TerraSAR-X, is also on tapfor the future. A second satellite would help collect three-dimensionaltopographic images of Earth.