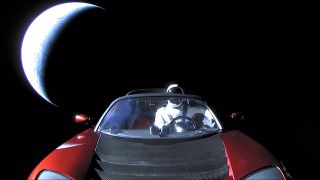 Elon Musk's Tesla Roadster and Starman cruise away from Earth in this final photo from the car after its launch on SpaceX's first Falcon Heavy rocket on Feb. 6, 2018.
(Image: © SpaceX)

The Tesla Roadster and "Starman" dummy that SpaceX launched on its new Falcon Heavy rocket on Tuesday (Feb. 6) does not appear to be heading to the asteroid belt, despite what SpaceX founder and CEO Elon Musk said on Twitter Tuesday evening.

After orbiting the Earth for about 6 hours, the cherry-red Roadster (which was mounted on the Falcon Heavy's upper stage) set sail into the solar system. One hour later, Musk tweeted that the car had "exceeded Mars orbit and kept going to the asteroid belt." The plan was to send the Roadster on an elliptical orbit around the sun, swinging by Mars along the way.

Now, it looks like Starman isn't actually heading toward the asteroid belt at all. After SpaceX released data on Starman's orbit on Wednesday (Feb. 7), experts on social media started crunching the numbers and noted that the data didn't match the trajectory that Musk had tweeted the day before. Rather, the data shows that the Roadster's orbit around the sun will take it closer to Mars than the asteroid belt. [In Photos: SpaceX's 1st Falcon Heavy Rocket Test Launch Success!]

"The asteroid orbit plot was just a mistake," Jonathan McDowell, an astronomer at the Harvard-Smithsonian Center for Astrophysics, told Space.com.

McDowell explained that the error apparently arose when someone at SpaceX used an orbital parameter called C3 — a measure of the velocity needed to escape Earth's gravity — to determine the shape of the Roadster's orbit "and goofed while doing it."

"For selling the rocket to customers, C3 is what you care about, [and] the actual orbit around the sun is not relevant," McDowell said, "so they weren't careful about calculating it."

McDowell calculated that the Roadster will venture by Mars at a safe distance of about 70 million miles (110 million kilometers) as it crosses the planet's orbit in July.

The closest it will ever get to Mars will be in October of 2020 at a distance of about 4.4 million miles (7 million km), which is still "well outside Mars' gravitational sphere of influence," McDowell wrote on Twitter. This means that the Roadster definitely won't be orbiting Mars as Musk first announced it would in a tweet last December.

Even with the new, corrected trajectory, these numbers and time frames are not set in stone. NASA's ephemeris calculator for the Roadster states, "Over time, prediction errors could increase more rapidly than the formal statistics indicate due to unmodeled solar pressure, thermal re-radiation, or outgassing accelerations that are not currently characterized."

McDowell said that these factors could affect the Roadster's predicted encounters "by at least 10 percent in distance and several weeks in date."

NASA's Jet Propulsion Laboratory has made the Roadster data publicly accessible, and you can find it at ssd.jpl.nasa.gov/horizons.cgi (select "target body" -143205).