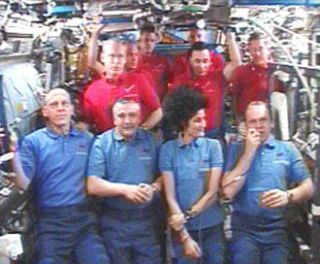 The Expedition 15 and STS-117 crews participate in a crew news conference with reporters on Earth. Image
(Image: © NASA TV)

HOUSTON -- Despitefacing down tough computer glitches amidst a busy mission to build up theInternational Space Station (ISS), spirits are high among the ten astronauts aboard the orbitallaboratory.

The jointcrews of NASA?s space shuttle Atlantis and the station?s Expedition 15 missionsaid they had faith that the beguilingcomputer issues in the Russian segment of the ISS over the last few dayswould be resolved.

?At thevery beginning we were a little bit worried about the status of the computers,?Expedition 15 flight engineer Oleg Kotov told reporters during space-to-groundpress conference Saturday. ?But we were sure that our ground team?couldtroubleshoot this problem, and it came true.?

?It?s agood day,? Yurchikhin said, adding that the busy joint mission with Atlantis?crew can be challenging yet rewarding. ?Sometimes it?s terrible, sometimesdifficult, but a very nice time for every one of us.?

Sturckowsaid he has no concerns over the surgicalstaple fix that secured a torn heat-resistant blanket to Atlantis? left aftengine pod. Spacewalker Danny Olivas used a medical stapler and wire pins toanchor the blanket down on Friday.

?I have alot of confidence in Danny?s work, so I think we?re going to be in good shape,?Sturckow said.

FourSTS-117 astronauts are making their first trip into space during the planned13-day mission, which has been a learning experience for some. Atlantis pilotLee Archambault said that the technical hurdles of the mission can pale incomparison with simple necessities in the weightlessness of space.

?Learninghow to eat, just getting around without gravity, is often times even a biggerchallenge than the technical things that we do,? Archambault said. ?Adapting tozero gravity provides a unique challenge that can?t be practiced anywhere else.?

Othercrewmates, meanwhile, said they were awed by the station?s size, even as theyhelped make it a bit bigger by adding new segments.

?The reallybig impressive moment was being out at the end of the truss as we werefinishing some of our work getting ready to unfurl the solar arrays?.and thenturning around and seeing this massive piece of equipment that we?ve beenbuilding over the last few years,? STS-117 spacewalker James Reilly said.

NASAastronaut Sunita Williams, formerly an Expedition 15 flight engineer, ispreparing to return to Earth with the Atlantis crew after six months aboard theISS. Earlier today, she seta new world record for the longest duration spaceflight by a female astronaut.

?I think Ihad a couple of wrenches in my hands, that?s how I celebrated,? Williams said,stressing that she was just in the right place at the right time to snag thetitle.

Williams ishanding her ISS flight engineer duties over to NASA astronaut Clayton Anderson,who is making his first spaceflight with the STS-117 and Expedition 15 missionsand had some fast lessons while the station crew wrangled with computer issuesthis week.

?I think I?mhanging in there,? Anderson said. ?It kind of reminds me of one of my swimminglessons when I got tossed in the water, but everybody?s been very helpful.?

Williamssaid the high points of mission were representing the U.S. as its solerepresentative aboard the ISS, and her four spacewalks to help outfit thestation.

?When you?reoutside and the only thing between you and space is your visor, you know that?spretty special,? she said.