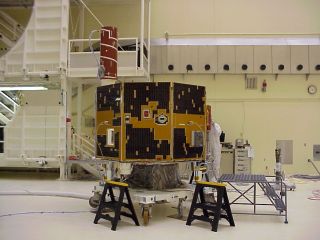 NASA's IMAGE satellite, before launch in 2000. NASA lost contact with the satellite in 2005, but in January 2018 the satellite once again began transmitting.
(Image: © NASA)

A long-lost-but-recently-rediscovered NASA satellite appears to have a fully charged battery and is "in good shape" overall, the agency said in an update about the craft yesterday (Feb. 5).

On Jan. 20, amateur astronomer Scott Tilly picked up transmission signals from what appeared to be NASA's Magnetopause-to-Aurora Global Exploration (IMAGE) satellite, which the agency lost contact with in 2005. NASA confirmed the probe's identity on Jan. 30 and is now investigating the spacecraft remotely to see how healthy it is.

"The next step is to attempt to turn on the science instruments — but this could take some time," NASA said in a statement. This is because the agency needs to re-create the original 12-year-old software used to operate the instruments. "Additionally, as computers have evolved greatly in that time, work is being done to find a machine that can run the instrument commanding software," according to the statement. [In Photos: Spotting Satellites and Spaceships from Earth]

IMAGE was launched in March 2000 for a planned two-year mission. It exceeded its lifetime and was operating through 2005, when NASA lost contact unexpectedly and the mission ended.

Now, NASA engineers are starting to understand what went wrong with the spacecraft. On Thanksgiving Day 2004, IMAGE underwent an unexpected reboot and lost one set of its redundant hardware. (Satellites usually have redundant hardware that are called "A side" and "B side," allowing controllers to continue a mission even if one set fails, according to NASA.) While it appears the A side of the electronics initially failed following the 2004 reboot, the A side is now transmitting, but the B side is not. Engineers are trying to figure out why the spacecraft rebooted again and began transmitting, and why only one side of the onboard electronics is working.

"The ultimate cause of the [recent] reboot is still not known," NASA officials added.

Meanwhile, NASA recently paid tribute to IMAGE's important discoveries about Earth's space weather. During its operational lifetime, the mission used an imaging technique called energetic neutral atom, or ENA, to make large-scale observations of Earth's magnetosphere, or the region around the planet where charged particles are controlled by magnetic field lines.

ENA works by exploiting fundamental physics. When electrically charged particles (such as ions) crash into neutral particles, the electrically charged particles can "steal" electrons from the neutral atoms, "becoming neutral themselves," NASA said in another statement. Then the new neutral atoms keep flying into space in the same direction in which they flew when the collision occurred.

IMAGE would record these particle movements at a large scale to see how plasma (a gas with free- floating charged particles and charged atoms) flowed around the Earth. One of IMAGE's discoveries was confirming a "plasmaspheric plume" around Earth. This is a backflow of plasma particles that flow toward the sun from the Earth's dayside. Models predicted this movement before, but IMAGE was the first spacecraft to see it, according to the statement.

"It's as if you're driving in a convertible," said Thomas Moore, the mission scientist for IMAGE, as well as the lead for the spacecraft's Low Energy Neutral Atom (LENA) Imager at NASA's Goddard Space Flight Center in Maryland, in the statement. "The air is rushing against the car in one direction, but your hair will blow towards the windshield."

NASA officials they are "starting to recreate" a small control center that will command the satellite and assess the functionality of the instruments.

"Should any of the instruments be functional, NASA will convene a panel of external scientists to assess the science potential in the context of constrained budgets for operating spacecraft," according to the statement.