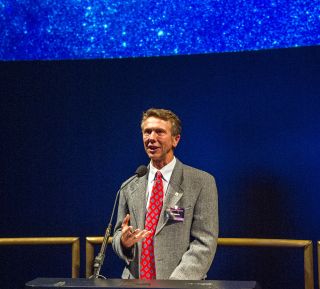 NASA officials announced today (Jan. 10) that the agency's Swift Gamma Ray Burst Explorer spacecraft has been renamed in memory of the mission's original principal investigator, Neil Gehrels, who passed away in February 2017. The space-based telescope, which launched in 2004, will now be known as the Neil Gehrels Swift Observatory.

"During his career, Neil wore many hats in service to the astrophysics community," Paul Hertz, director of NASA's Astrophysics Division, said today during a press conference at the 231st meeting of the American Astronomical Society in Washington, D.C. "But Neil was best-known for his role as the principal investigator of the Swift mission," Hertz said.

The Swift spacecraft was designed to be able to quickly and autonomously turn itself toward objects that are moving rapidly through the sky, or brightening and dimming in the sky on short timescales. Traditionally, astronomers have observed phenomena that change on incredibly long timescales, so this new approach was dubbed "time domain astronomy." Swift's original two-year mission was to uncover the nature of gamma-ray bursts, or the then-unexplained flashes of very high-energy light that are seen throughout the universe.

"In the years since its prime mission ended, Swift has been used as the go-to facility for [studying] transient and variable cosmic phenomena of all kinds," Hertz said. "Neil's vision and leadership were critical in ushering in the new era of time domain astronomy."

Gehrels served as principal investigator of Swift up until his death last year. He also served as the chief of the Astroparticle Physics Laboratory at NASA's Goddard Space Flight Center. In addition, he was a project scientist for the Compton Gamma-ray Observatory; for its successor, the Fermi Gamma-ray Space Telescope; and for NASA's upcoming Wide Field Infrared Survey Telescope (WFIRST), which is expected to launch in the early 2020s.