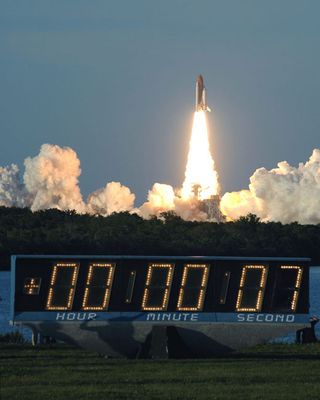 The space shuttle Atlantis rockets skyward from Pad 39A at NASA's Kennedy Space Center to kick off the STS-117 construction mission to the International Space Station.
(Image: © Robert Pearlman/collectSPACE.com.)

"We had a very good countdown and launch,? said NASA associateadministrator Rex Geveden in a post-launch news conference. ?The space shuttleAtlantis is safely in orbit for the STS-117 mission.?

Atlantislifted off from Pad 39A here at NASA's seaside Kennedy Space Center at7:38:04 p.m. EDT (2338:04 GMT), rising on a sinuouscloud of expanding smoke in a blue sky still illuminated by sunlight.

"It was a beautiful launch," said NASA launch director Mike Leinbach."I had forgotten how beautiful they were."

"The tank performed in a magnificent way despite having several thousandrepairs done on it," Hale said. "As I told?the external tank manager,'Give me more speckled tanks.'"

Preliminary analysis of images taken by onboard cameras revealed expected"popcorning" foam loss during ascent but none that appeared to strikethe orbiter.

NASA haskept a close watch on the shedding of fuel tank foam insulation during shuttlelaunches since the 2003 Columbiaaccident, which claimed the lives of seven astronauts, and mademodifications to reduce the amount of debris shed during liftoffs.

"I wouldn't doubt that there's some foam missing from the tank in someareas," said Bill Gersteinmaier, associate administrator for spaceoperations.  ?We've seen it before but we need to take a good look atthat, [so] we don't count our chickens before they hatch.?

Weather was also cooperative on launch day, as sea breezes blew afternoonthunderclouds inland away from the launch facility in time for liftoff, just asweather forecasters predicted.

"It felt great from beginning to end, and all the way in between,"Leroy Cain, who chairs Atlantis? STS-117 Mission Management Team, said of thelaunch.