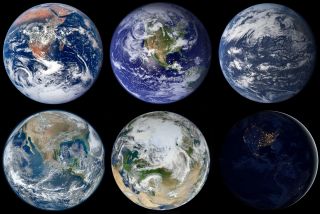 Sputnik 1 started it all. The beachball-sized satellite was launched by the Soviet Union on October 4, 1957 and, despite a relatively short mission of only 21 days in orbit around Earth, quickly became regarded as a device that changed the world. It represented the beginning of the Space Age – and immediately heightened tensions between the US and the USSR, prompting fears about the weaponising of space.

But Sputnik, and the missions that were to follow as humankind sought to bring space increasingly within the reach of the Earth, was not just about rivalry. There was to be unprecedented international cooperation, as in the collaboration over the International Space Station. Nowadays, you are more likely to hear about the competition between private and state-owned companies for ownership of the next big space programme.

Perhaps the longest lasting of Sputnik's many legacies is the idea that orbital circumnavigation brings the world together. This idea gathered momentum in the 1960s and 1970s with the tradition of orbital photography that started with NASA's Earthrise and Blue Marble images and continues today with the thousands of striking photos of Earth taken by astronauts on the International Space Station. It is a photographic tradition that is often credited with revealing the world to its inhabitants.

Have a look at Earth

To focus on Sputnik's technological, political, military, commercial or photographic legacy is, however, to neglect the strange practice of sending poetry into space. In 2013, more than 1,100 haikus were sent on NASA's MAVEN (Mars Atmosphere and Volatile Evolution) probe. These poems were selected by public vote following a competition that invited submissions from around the world.

The winner, by Benedict Smith, points to the failed project of global community in the age of satellites and spacecraft:

In 2014, NASA again sent poetry into space when Maya Angelou's poem A Brave and Startling Truth was carried on Orion's orbital test flight. Commemorating the UN's 50th anniversary in 1995, this poem offers an inspirational vision of humanity's capacity to overcome conflict.

Written as though from beyond the world, Angelou's poem is at the same time focused on the human and the earthly.

What it sees is a humanity that is not subject to a celestial gaze or divine authority, but can direct the course of worldly affairs and aspire to planetary peace. At the culmination of this poem, Angelou writes:

Predating Angelou's poem and MAVEN's haikus by several decades is Thomas Bergin's For A Space Prober. Etched into an instrumentation panel on the Transit Research and Attitude Control (TRAAC) satellite that was launched on November 15, 1961, Bergin's poem was the first literary work to leave Earth. This poem continues to circle the Earth at an altitude of 600 miles – and it is expected to remain there for 800 years. It is a message to the gods that declares the end of their belligerent influence:

Bergin was Professor of Romance Languages at Yale University from 1945 to 1973 – and known in particular for his 1955 English translation of Dante's The Divine Comedy. Dante's poem is significant partly because of the medieval cosmology that it articulates.

The world, The Divine Comedy tells us, is its own entity and can be comprehended. It is not merely a subordinate element in a larger, and mysterious, divine order. Dante's poem announces the arrival of this outlook at a time when the influence of the heavenly kingdom was retreating. No longer subject to a higher authority, humanity started at this point to take on a transcendent perspective. The secular world became able to see, and to take control of, itself.

Bergin's poem is shaped by this vision of a world that is detaching itself from the realm of the gods. It is humanity's ability to rise above and comprehend its earthly home that is affirmed by the first poem sent into orbit. It is, then, part of an overlooked literary legacy that situates orbital circumnavigation in deep theological and earthly time.

Before the Earthrise and Blue Marble photos, it is poetry that offers a vision of the whole world. However, this poem also exposes a blind spot in the story of Sputnik's journey and its aftermath. It reveals how, 60 years ago, orbit was not viewed exclusively as the space of a heightened military threat or the source of new national divisions. Remarkably, the first poem in space petitions for the decommissioning of weapons in orbit and calls for universal peace.