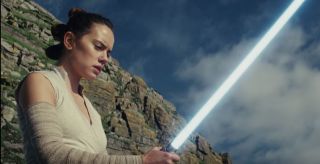 Star Wars: The Last Jedi follows the journey of Rey as the heroine discovers and learns about the Force, just as her teacher Luke Skywalker and his father Anakin did in the Galactic Rebellion and Clone Wars (more on this later). This raises an obvious question: What is the Force and where does it come from?

The Force is described to Luke in the original Star Wars as the source of a Jedi knight’s powers, “an energy field created by all living things” that binds us and the galaxy together, and derided by an Imperial officer as “sorcerer’s way” and an “ancient religion.” Taken together, it led many to conclude that the Force was a mystical, paranormal power.

More than two decades later, another possibility arose. When I first watched Star Wars: The Phantom Menace in 1999, and “midi-chlorians” were mentioned, I was intrigued.

Midi-chlorians were presented as a life form that lived inside the cells of all living creatures, and that the potential to sense and use the Force was intimately tied to their numbers.

As a scientist, it was comforting to finally have a quantifiable and rational explanation for the ability to sense and use the Force. It was a cool concept as the capacity to use the Force appeared to be genetic (at least in the Skywalker family), and this addition to the Star Wars’ canon might help to explain why.

The organisms inside our cells

I didn’t groan at this idea unlike most other Star Wars fans — many of whom were outraged by the perceived reduction of the Force from a grand, almost magical power to a function of biology — because I’m a biologist who studies bioenergetics: How organisms convert various molecules (food) into chemical energy (adenosine triphosphate or ATP, a compound that enables energy transfer between cells) that can be used to power life.

Many life forms on our planet produce ATP in cellular compartments called mitochondria. In 1967, Dr. Lynn Margulis proposed the idea that our mitochondria were once free-living bacteria before they became an integral component of our cells. It was seen as a ludicrous idea at the time and was met with much disbelief and mockery.

This theory of endosymbiosis, a symbiotic relationship between an organism living inside another, has stood the test of time.

It is now recognized as one of the most important evolutionary innovations of life on our planet, and contributed to the origin of eukaryotic cells, which which humans are made of. Eukaryotic cells enclose their elements, or organelles, inside a membrane.

While mitochondria are no doubt useful for energy production, they are a double-edged sword. They generate reactive oxygen species — unstable molecules that contain oxygen — which are harmful to cells.

One can argue that there is a dark and a light side of energy transfer, both in how the energy is harvested and the effects associated with the biochemistry involved.

Mitochondria contain their own genomes (DNA) that are relics of their once free-living origins, and it was recently demonstrated that a single mitochondrion can contain multiple, different copies of the mitochondrial DNA.

If midi-chlorians in Star Wars follow the provenance of mitochondria in humans, it may give credence to a theory about Rey’s parenthood.

In a neat case of life imitating art, a bacterium that lives in the mitochondria of the tick Ixodes ricinus was named Candidatus Midichloria mitochondrii in homage to George Lucas’s vision of life in a galaxy far, far away.

If there is a biological element to the Force, it raises a question if Rey gained her power through familial lines.

Many examples of symbiotic relationships exist in science fiction such as the Trill in Star Trek, the creatures in Alien, and the bond between Na’vi and toruks in Avatar.

Since we know that organisms live inside our cells, the existence of midi-chlorians in Star Wars doesn’t seem so far-fetched. It raises a question about their degree of influence.

Midi-chlorians are described as sentient organisms. This casts the motivations of the people in the saga in a new light.

Do midi-chlorians provide benefits to their hosts by allowing Jedi and Sith to access the Force for their own purposes? Or are the Jedi and Sith mere puppets under the control of internal parasite factions bent on ruling the galaxy?

Toxoplasma gondii is a parasite that infects a wide range of mammals and is especially dangerous to pregnant women due to the possibility of neurological damage to the fetus or baby.

The parasite uses mice as an intermediate host, while cats are required as a host for the parasite to complete sexual reproduction in its life cycle. That’s why pregnant women are warned against cleaning out litter boxes.

What is amazing is that the presence of T. gondii cysts in particular areas of the mouse brain drastically alters their behaviour. These mice are constantly on the move, which makes them more likely to attract the attention of a cat and be eaten. The endosymbiont alters the behaviour of its host.

So it seems that the theory of Star Wars’ midi-chlorians controlling their hosts could have some merit.

Whatever the origin and outcomes of the Force, other aspects of Star Wars raise questions that can more definitively be answered by science.

The Clone Wars depicted in the prequel trilogy show the origin of the ubiquitous storm troopers: They are a clone army.

While the cloning process in Star Wars is not clear, we can assess them based on our own knowledge of biology.

Animal cloning uses a process known as somatic-cell nuclear transfer, where the nucleus from an adult (donor) cell is transferred into an egg (host) cell lacking a nucleus. The most famous example of this technology produced Dolly the sheep.

In Star Wars: Attack of the Clones, the nuclear DNA for clone army grown on the planet Kamino for the Galactic Republic came from the bounty hunter Jango Fett — Boba Fett‘s father. However, female egg cells would also have been required for successful cloning to take place, and this is never addressed.

In order for all of the clones to have been exact copies of each other, the egg cells would have had to have come from the same female donor. That would have required at least 691,200,000 eggs, and as many as 1,728,000,000 — which is a lot. (Human females are born with about 1 million eggs, and 300,000 remain by puberty.) More importantly, each of those eggs would have contained different mitochondrial populations from a genomic perspective.

Each individual clone is therefore highly unlikely to be genetically identical at birth. In addition, it is now clear that mutations due to environmental factors can occur during the course of a lifetime in both nuclear and mitochondrial DNA, so even if clones were initially identical genetically, they would be unlikely to stay so during the course of their lifetimes.

We have known for some time that it’s not only the sequence of the DNA that is important; the physical scaffold, organization, and regulation of the DNA is also key and is known as epigenetics.

Several studies in twins that originate from a single egg and its nucleus have revealed epigenetic differences between people who are identical at the level of DNA sequence. It would appear that Star Wars: Attack of the Clones is an inaccurate movie title.

What does this mean for Star Wars? They couldn’t possibly have had clones that were exactly identical, always obedient soldiers. Perhaps a more realistic depiction would have meant the events of the films couldn’t have unfolded as they did.

One thing is certain: Art draws on our knowledge of culture, society and science to make products that challenge our concepts and ideas of what it means to be human.