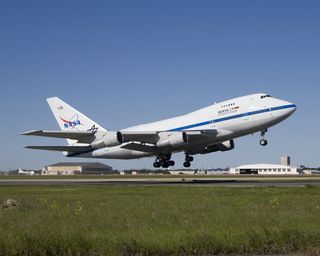 NASA'sStratospheric Observatory for Infrared Astronomy left Texas for SouthernCalifornia on May 31 to continue engineering flight tests at NASA's Dryden Flight Research Center at Edwards Air Force Base. A consortium led by UniversitiesSpace Research Association (USRA) developed SOFIA as a world-class infraredastronomical observatory for NASA and DLR, Deutsches Zentrum fur Luft und Raumfahrt (German Aerospace Center). L-3Communications Integrated Systems, located in Waco, Texas, installed theGerman-built 2.5-meter infrared telescope and made other major modifications tothe 747 over the past several years. The SETI Institute with its partner, theAstronomical Society of the Pacific, leads the education and public outreachprogram for SOFIA as a part of the USRA consortium.

SOFIA's maiden flight as anobservatory occurred on April 27 from Waco, Texas. This 2-hour flight was soonfollowed by additional engineering flights to assure the NASADryden team that SOFIA was ready for her ferry flight to California.

OnMay 21, ErikLindbergh, grandson of Charles Lindbergh, re-christened the Boeing 747-SPthat was named for his famous grandfather and originally christened by hiswife, Anne Morrow Lindbergh, as the Clipper Lindbergh under Pan Americanownership. This historic celebration of the aircraft that has been transformedinto the infrared observatory, SOFIA, coincided with the 80thanniversary of Lindbergh's daring solo flight across the Atlantic from GardenCity, New York to Paris, France.

Theobservatory now has a new home in desert of Southern California. At Dryden, SOFIA is scheduled to undergo installation and integration of mission systems and amulti-phase flight test program at Dryden over the next three years that isexpected to lead to a full operational capability to conduct astronomy missionsin about 2010.

Duringits expected 20-year lifetime, SOFIA will be capable of "GreatObservatory" class astronomical science, providing astronomers withaccess to the visible, infrared and sub-millimeter spectrum with optimizedperformance in the mid-infrared to sub-millimeter range. SOFIA's science andmission operations are managed jointly by the Universities Space ResearchAssociation and the Deutsches SOFIA Institut, and are based at NASA's Ames Research Center at Moffett Field near San Jose, Calif. Once operational in the 2009-2010period, SOFIA will be the world's primary infrared observatory during a missionlasting up to 20 years, as well as an outstanding laboratory for developing andtesting instrumentation and detector technology. For Education and PublicOutreach, SOFIA's Airborne Astronomy Ambassadors program will train teams ofeducators to participate in flight missions, which will allow this unique NASAMission to reach schools and the public across the US and Germany.