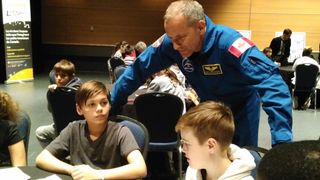 Canadian astronaut David Saint-Jacques interacts with students during an event to launch the Little Inventors: Inventions for Space initiative, at the Canadian Aviation and Space Museum in Ottawa.
(Image: © Elizabeth Howell)

OTTAWA, Ontario – Sixth-grade students Allegra and Jayne watched countless videos of astronauts living and working in space, and tried to figure out what cool invention spacefarers might need next on the International Space Station (ISS).

Then, the students saw a video of NASA astronaut Karen Nyberg washing and drying her hair in space. That sparked an idea: a hair dryer that can recycle water inside the space station. The girls, who are students at St. Patrick Elementary School in Barrhaven (a suburb of Ottawa), drew up a design on paper.

"This would suck all the water out," said Jayne in an interview with Space.com. (For privacy reasons, the girls' last names were not disclosed.)

"We wanted to filter the water, because you need drinking water," added Allegra during the interview. "Astronauts need a lot of water, I guess."

Then, the inventors got to show the design to a real-life astronaut. Canadian Space Agency astronaut David Saint-Jacques — who will join Expedition 58/59 on the ISS in November 2018 — met with about 30 students from the school on Nov. 30 to kickoff an initiative called Little Inventors: Inventions for Space, led by the Natural Sciences and Engineering Research Council of Canada (NSERC). The program is open to all students in Canada in grades 1 through 9.

"Space needs good brains," said Saint-Jacques in a speech to the students here at the Canada Aviation and Space Museum in Ottowa . "We need smart people like you to think it's fun to invent, who think it's fun to explore, and [who] want to scratch their heads to come up with great new inventions."

Another invention proposed by one of the students was a robot that could bring medication or bandages to an injured astronaut, with the help of voice recognition. In between medical runs, the robot would rest at a charging station.

"I wrote down all the problems you can have in space, and I think it will help," said sixth grader Corbyn, who designed the invention.

Saint-Jacques said that the process of learning how to work with space technology today, could inspire students to continue studying science as they progress through their academic careers.

"Your little ideas can grow into reality," he added in English, "so it's a good chance to express your ingenuity and creativity and help us tackle some of the challenges we face in space exploration."

The Little Inventors program originated in the United Kingdom in 2015, but in just two years, it has gained participation from several other countries. A round of student science-experiment submissions (not necessarily related to space exploration) took place in Canada a few months ago, garnering 500 entries from across the country. Of those, 18 were selected to be displayed in the museum.

Organizer Dominic Wilcox said the project is expanding into China, Poland and the Middle East, as well as Canada. The Canadian version is mainly supported by NSERC.

The St. Patrick Elementary School event at the museum was a trial launch for the Little Inventors space-themed program, and Wilcox said he expects many other schools will participate before and during Saint-Jacques' mission.

"Any teacher in Canada can get involved," Wilcox said. "They can go to the website and download the lesson plan."

For an example of how much a single space experiment can impact a student's career, look no further than Linda Dao. While working on her undergraduate degree at McMaster University in Ontario, she made a last-minute submission to a contest that sent student experiments to the space station, where they would be carried out by Canadian astronaut Chris Hadfield in 2013. Dao actually sent in two experiments; she said she felt her first one wasn't strong enough to win and decided to send another.

Dao's second experiment, called "Minimizing Surface Tension in Microgravity," won the individual portion of the Hadfield contest. The astronaut performed her experiment in space and then phoned Dao. She said this experience launched her interest in space science.

"The experience of speaking to the first Canadian commander of the ISS had an astronomical impact on my future endeavors," Dao said in an email to Space.com. She noted that she subsequently completed graduate studies at the International Space University and is now giving back to the community through activities with Students for the Exploration and Development of Space (SEDS) Canada.

This week, Dao was at the Canadian Space Agency headquarters in Longueuil, Quebec. There, she watched the next Canadian astronaut set to go to space, Saint-Jacques, talk about his planned science experiments for November 2018.