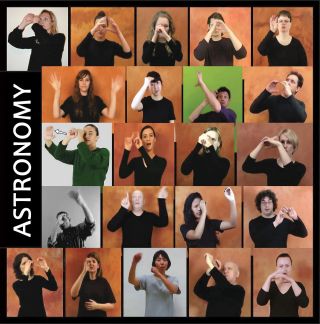 The term "astronomy" as it is represented in sign language in different countries.
(Image: © IAU-C1 WG3 and collaborators)

It may now be a bit easier for hearing-impaired people to discuss and study the cosmos.

A team of scientists and educators has just released a list of 47 common astronomy terms — such as comet, galaxy, asteroid and telescope — as rendered via signs in a number of different languages, including German, Portuguese and Japanese.

The list, which you can see here, is the first international comparative compilation of its kind for this particular subject matter, project team members said.

"Its main goal is to help to reflect on the differences between the various languages, perhaps even helping communities to develop their own sign if they did not yet have one for a particular term," representatives of the International Astronomical Union (IAU), which led the project's development, said in a statement. "The suggested signs are meant to engage the deaf community in scientific discussion."

The new list follows in the footsteps of other efforts to standardize and disseminate astronomy signs. In 2009, for example, a team led by Paris Observatory astrophysicist Dominique Proust published a dictionary called "Hands in the Stars," which contains about 300 French Sign Language signs for common astronomical objects and equipment.

In 2016 and 2017, an IAU-led team translated "Hands in the Stars" into the signs used by hearing-impaired people in English- and Spanish-speaking countries. This experience helped inspire the compilation of the new list, IAU representatives said.

"A Universal Sign Language is gradually being developed, mainly to designate objects and situations related to contemporary technology or events," Proust, who also helped put together the new list, said in the same statement. "Nevertheless, there will always be differences between signs in each country that need to be noted, as countries have developed [their] own signs through time."