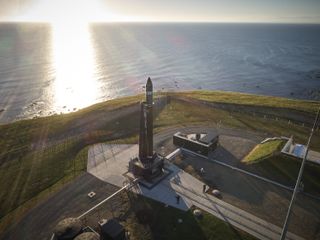 A Rocket Lab Electron rocket sits on the launchpad at the company's launch facility in New Zealand, ahead of a test flight. The launch window opens Dec. 8, 2017.
(Image: © Rocket Lab)

Update 12/14: Rocket Lab delayed the launch of its Electron rocket again, this time because a power fault was detected during ground checkouts. Company representatives say they will work to resolve the issue tomorrow (Dec. 15), then determine when they will try to launch again.

Update 12/13: Rocket Lab has once again delayed the launch of its Electron rocket due to weather. Company representatives say they will try again tomorrow (Thursday Dec. 14 in the U.S./Friday Dec. 15 in New Zealand).

Update 12/11: The skies are clear for Rocket Lab to attempt the second test launch of it's Electron rocket. You can watch the launch in the window above, courtesy of Rocket Lab. Check the company's Twitter account for the most recent updates.

Update 12/10: Rocket Lab has once again delayed the second test launch of its Electron rocket, citing weather and "orbital traffic." Representatives said on Twitter they will try again tomorrow (Dec. 11 in the U.S., Dec. 12 in New Zealand), during the same time frame.

Update 12/10: Rocket Lab will attempt its second test launch of an Electron rocket today. The launch window opens at 2:30 p.m. New Zealand time on Dec. 11, which is 8:30 p.m. EST on Sunday, Dec. 10. The launch window is four hours long. You can watch the launch via the YouTube page above, courtesy of Rocket Lab.

Update 12/8: The Dec. 7 test launch of a Rocket Lab Electron rocket was scrubbed due to weather. Rocket Lab representatives said today on Twitter that they plan to launch no earlier than 2:30 p.m. New Zealand Time on Monday, Dec. 11, which is 8:30 p.m. EST on Sunday, Dec. 10.

The small-rocket startup Rocket Lab will attempt to launch its first customer payloads into orbit  from New Zealand tonight (Dec. 7), and you have a chance to watch it live online.

Rocket Lab's Electron rocket is scheduled to lift off from the company's private launch range in New Zealand. The 4-hour launch window that begins at 8:30 p.m. EST, which is 2:30 p.m. on Dec. 8 New Zealand Time.  The company will provide a livestream of the launch on their website here, starting about 15 minutes before the rocket's anticipated launch. That same launch window will remain open for 10 days, and company representatives have said delays are likely, given the rocket is still in a testing phase.

"We're expecting to scrub multiple times as we wait for perfect conditions and make sure everything on the vehicle is performing as it should," said Peter Beck, Rocket Lab founder and CEO, in a statement.

If the Electron performs as expected, it will deploy three customer satellites. One is a bread loaf-size, Earth-imaging Dove satellite from the private company Planet (formerly Planet Labs). The other two are both Lemur-2 satellites for the private company Spire, which could be used for tracking ship traffic or mapping weather.

This will be the second test flight of Electron. The first test flight, which took place May 25, didn't go exactly as planned. After liftoff was delayed several days due to poor weather, the third stage of the rocket didn't attain its intended altitude of 310 miles (500 kilometers).

In August, Rocket Lab issued a statement saying that a review of the May 25 attempt "found the launch had to be terminated due to an independent contractor's ground equipment issue, rather than an issue with the rocket."

The launch — titled "Still Testing" — is the second of three planned test launches of the Electron rocket from Launch Complex 1 on the Mahia Peninsula, New Zealand. But if this second launch goes to plan, the company's "commercial phase may be accelerated," Rocket Lab officials said in a statement.

Electron stands about 55 feet (17 meters) tall and can carry up to about 500 lbs. (225 kilograms). Unlike most traditional rockets, Electron is designed primarily to send small payloads into space, Beck told Space.com last year. The rocket is intended to give customers more flexibility regarding when their payloads launch and how often, instead of being subject to the scheduling demands of larger payloads.

The company has a few competitors in the small-rocket business, including Virgin Orbit (formerly part of Virgin Galactic, but now a separate entity in the Virgin Group), which is planning test flights of its LauncherOne small-satellite launch system in 2018. Commercial flights may start before 2019. Another is Vector Space Systems, whose Vector-R rocket performed a low-altitude test flight earlier this year.