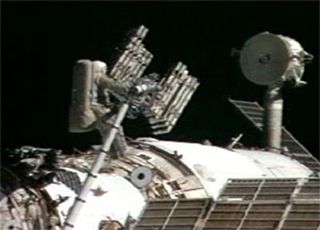 ISS Expedition 15 flight engineer Oleg Kotov guides a bundle of debris panels during a May 30, 2007 spacewalk, the first of two to install new shielding at the ISS.
(Image: © NASA TV.)

?It?s veryimportant that we continue with our Russian EVAs,? Yurchikhin told reportersbefore a May 30spacewalk, or extravehicular activity (EVA), also aimed at installing newISS shielding.

Yurchikhinand Kotov are both making their second career spacewalks with today?sexcursion, which also comes two days before the planned launch of NASA?s space shuttle Atlantis carryingseven astronauts and new solar arrays bound for the ISS.

Expedition15 flight engineer Sunita Williams will watch over the progress of her twocrewmates from inside the ISS and help choreograph their activities.

Each panelweighs between about 15 and 20 pounds (about seven to nine kilograms) andcovers a two-foot by three-foot (0.6 by 0.9 meters) patch of space stationhull, NASA officials said. The shields will help guard the space stationagainst damage from tiny space rocks -- or micrometeorites -- and orbitaldebris from jettisoned rocket stages, satellites and other spacecraft. Thepotential collision with micrometeorites and debris has been one of the toprisks to the space station, NASA has said.

?We?ve beenworking on these for years, actually since prior to the first launch of thespace station,? Kirk Shireman, NASA?s deputy ISS program manager, said of theincreased shielding. ?We actually launched the space station in 1998. Andthrough 2016, if you look at that life, there?s a lot of debris that we?ll flythrough in that time frame and so that?s why it?s our highest risk.?

In additionto installing the new station shielding, Yurchikhin and Kotov are expected tothread a 43-foot (13.1-meter) Ethernet cable along the exterior of the ISS andattach a Russian science experiment to the orbital laboratory?s hull.

The Ethernetcable, which will run along handrails mounted to the station?s Russian-builtZarya control module, is part of a computer system upgrade for the ISS. Asecond cable will be installed in a later spacewalk.

Biorisk,a Russian-built experiment to study the effect of weightlessness onmicroorganisms, will also be mounted to the space station?s Pirs dockingcompartment -- the starting point for today?s EVA -- during the spacewalk. Itsthree cylindrical sample containers will be retrieved by future spacewalkers.

?It will bethe first EVAs for both of us and we?re really looking forward to performingthis job,? Kotov told reporters before the two spacewalks. ?We?re verywell-trained and that?s why we?re very sure of our success.?