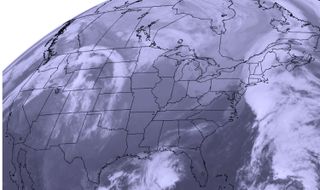 The National Oceanic and Atmospheric Administration’s GOES-East satellite captured this visible-light image of storm systems on the U.S. East and West coasts on Nov. 22, 2017.
(Image: © NOAA/UWM-CIMSS)

The visible-light image, which was captured this morning (Nov. 22) by the National Oceanic and Atmospheric Administration's GOES-East satellite, shows storm systems swirling around both the East and West coasts of the United States.

"In the northeastern U.S., clouds associated with a cold front were covering the New England states in the image," NASA officials wrote in a description of the photo. (NASA is a key partner on the GOES program, whose name is short for "Geostationary Operational Environmental Satellites.")

"Clouds associated with a system in the Pacific Northwest were seen over Washington State, Oregon, Idaho, Montana and Colorado," the officials added. "Pre-Thanksgiving travelers in the northern Plains and Upper Great Lakes will experience arctic air that is expected to bring periods of snow, blustery winds and cold wind chills."